When I first joined a renaissance faire guild, I was very concerned about getting the reenactment right. Nothing ‘mundane’ or from the current century could be visible in the camp yard, including the materials used in our costumes, and I’ll be the first one to tell you that history is not my strong suit.

I was especially concerned with screwing up the schtick when we had to interact with the faire’s Queen Elizabeth, she was the Queen, she knew everything. And she’d know immediately that I couldn’t cut it in this make-believe.

Well it turns out, the faire is less concerned with historical accuracy than it is about inappropriate sex jokes and attempts at dramatic flourish. Anything obviously non-period just became fae-touched and the acting moved right on to the next bit.

When I saw the first Pirates of the Caribbean movie it was an advance showing thanks to a friend’s birthday. I saw it twice more on opening weekend and another three times during the following week. To say that I love that movie doesn’t quite capture it.

The Pirates franchise is a lot like ren faire, mostly-sort-of accurate at a distance, but the anachronisms pop up alarmingly once you get too close. The movies are more concerned with setting up a good joke than getting the historical details perfect.

The Act of Piracy series is in this vein of storytelling—a romping adventure with some romance and paranormal activity set in a time-period that’s more hand-wavy than precise. It’s not a historical series, and it’s not meant to be. The language isn’t perfectly 1800’s, the technology isn’t exactly 1780’s, and major historical events might not land exactly when they happened.

It’s about pirates, spirits, and finding your rightful family around you. So squint a little bit and enjoy the ride!

About Ruin and Will: 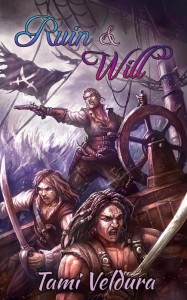 To change his fate, Kyros Vindex made a deal with witches: Eric’s heart for anything in the world. But the cost of love was too high. His quartermaster and best friend Araceli Cross is trapped with the spirit Ghalil. Driven by his guilt, Kyros becomes obsessed with the impossible. To get Araceli back, he’ll have to renege on the witches’ blood pact.

Finally free of the demon that possessed him for seven years, Eric Deumont is ready to chase the horizon. Try as he might, he can’t convince his lover Kyros to move on. And Kyros expects him to return to the plantation, and the man, where it all started; as if there was a chance Philippe could pull Araceli out of the jar. But Eric won’t risk unleashing Ghalil, not for anyone. It’s time to cut and run.

Araceli fights Ghalil with everything she has but when the demon merges their souls, they break the seal of their cage. However, physical freedom doesn’t change the fight for dominance. Ghalil’s demand for blood shackles her, and Araceli is nobody’s slave.

With Ghalil free, time is a luxury that no one has. And all the while, the witch crows watch…

Find it on Amazon and Barnes and Noble.