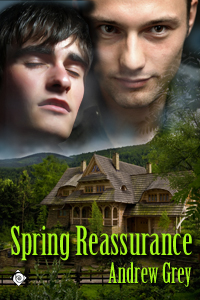 After four wonderful months, an unsettling move to a new home, and a confrontation with Blayne’s father, Roeder worries that Blayne will miss his old life and return to it, leaving him behind. What if they aren’t meant to be? His worries flare into outright panic when Blayne is critically injured, and Roeder knows he’ll soon have his answer: The gods will ultimately decide if their love will endure.

This story is no longer in print