Like many of you, I love a hot fireman, especially one with a gentle heart under his rugged exterior.  With that in mind, I wrote Fireman’s Cary.  We all know that firemen carry people out of burning buildings, but sometimes it’s the fireman who needs to be carried, even if it’s only in spirit.  Fireman’s Carry is releasing April 18 and is self-published. 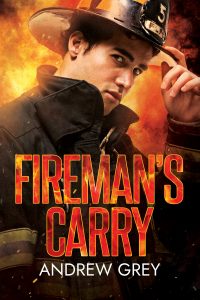 Orphaned as a child, Jordan Kramer is a 28-year-old loner who lives for his work as a firefighter. It’s who he is. But his life changes when, on his way home from a fire, he finds Benny walking along the side of an isolated mountain road. With a storm coming, when Benny indicates that he’s alone in the world, Jordan follows his instincts and decides to help.

To child psychologist Duane Houser, Jordan was the one who got away when Duane got adopted as a teenager. So imagine his surprise when he’s called to help a traumatized child and crosses paths with Jordan again after all these years. Jordan is still as he remembers—stunning and strong, with a hero streak a mile wide.

Both Jordan and Duane understand a life without parents and swing into action to help Benny. The boy’s life is a bit of a mystery, and as they work together to help Benny, they rekindle feelings both had kept hidden. The chill from years spent apart quickly melts away and old love flames to life again. While helping Benny process the loss of his family, both Jordan and Duane realize that their shared desire might be within reach. Or they could have it ripped away from them all over again.

As he drove, Jordan turned on the radio for some music and rolled down the window. He smelled like fire and smoke, and now that he was away from it, the scent burned his nose a little and he needed some fresh air. Jordan sang along with the radio as he went down the largely empty road, losing himself in the music until something along the side of the road caught the side beam of his headlights. Jordan put on the brakes, intending to slow down, and passed a child, alone, out here. He pulled off the road, got out, and approached slowly.

It was a boy, maybe nine or ten years old, wearing clothes that might have been new two or three wearers ago. He stood on the side of the road, drawing back when Jordan got closer.

“I’m not going to hurt you. I promise,” he said softly. He was well aware of stranger-danger teaching in school, and he didn’t want this boy to be afraid of him, but how could he not be? “Are you alone? Do you need help?” he asked, keeping his voice soft and staying in the light so the boy could clearly see him.

The boy shrugged and looked all around, but didn’t run. He blinked back to Jordan almost as though he wasn’t sure what to do.

“Can you tell me where your parents are? Where is your mother?” Jordan asked. The boy looked upward, plaintively, and Jordan thought he was going to cry. Damn, well, that was an answer Jordan hadn’t been expecting, if it was an answer at all. “How about your father?” This time the boy pointed up the road back toward the mountains. “Is your father back there? Do you want me to take him to him? I’m a fireman and I promise to help you.”

Tears rolled down the boy’s face, and his lips contorted in what Jordan could only describe as grief, but he didn’t actually say anything. Jordan blinked, hoping against hope he was misunderstanding the messages he was getting. Okay, regardless of what had happened to his boy’s parents, he needed to help him. Jordan thought of calling the police, but the boy looked half frightened out of his wits, and Jordan was afraid that would just drive him over the edge.

Lightning flashed to the west, followed by a long roll of thunder. Rain was coming, and while they needed it, he very much wanted to get this child out of the storm’s path. Jordan thought carefully, then decided what to do. “Have you had anything to eat?” he asked.

Jordan went to his car and returned with a couple of granola bars. He’d half expected the boy to be gone as soon as he turned his back, like some apparition Jordan had dreamed up, but he stood in the same place, as tense as a bow string. Jordan handed him one of the packages and stepped back.

The boy looked at it, rolling the package through his fingers before opening it. Then he took out one of the crunchy bars and ate it in two bites, barely chewing. After he ate the other one, Jordan got a bottle of water and another package of granola bars, and gave those to the boy as well.

“Can you talk to me?” Jordan asked once the boy had eaten a second pack and drank most of the water. More lightning flashed, getting brighter as the storm approached, the thunder growing louder. “Will you talk?”

“Yes,” the boy said, a single word. At least Jordan knew he understood him and could speak.

“Where did you come from?” Jordan asked again.

The boy pointed back toward the mountains, this time saying one word. “Home.” Tears once again ran down his cheeks.

“Do you want me to take you back there?” Jordan asked. “Is that where your family is?” He knew he was covering old ground, but he wanted to try to get a clearer picture of the situation.

This time he got a shrug, and more tears came.

Oh God. “You’re saying that your home is up there, but that its gone now? That you don’t have a home?” He wanted to try to get as many facts as possible.

All he got was a nod as the boy rubbed his sleeve over his eyes and sniffled once. Then he stood as tall as he could, his face hard.