Biochemistry the follow up to Organic Chemistry releases tonight at midnight.  I love this story mainly because it touched something deep in my nerdy little heart.  I absolutely love the idea of the nerdy, bookish kid catching the eye of the football quarterback.  When I was in college I used to dream about catching a football nice, hot, dreamy football player of my very own  Biochemistry is as close as I got. 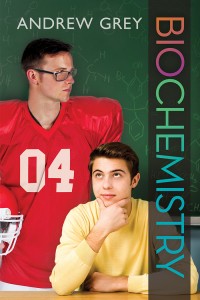 When his college biochemistry class turns out to be much more difficult than star quarterback Freddy Samuelson imagined, his lab partner, Kurt Maxwell, agrees to help. They’re very different: a rich kid athlete and a hardworking openly gay scholarship student. But Kurt slips past Freddy’s defenses, and little by little—despite Freddy ignoring his own sexuality in the past—Freddy realizes he wants to get to know Kurt, especially when Kurt helps him through more challenges than their science class. But it isn’t long before rumors begin to fly, and the obstacles Freddy will face may block him from both the future he planned on and the future he didn’t know he wanted.

Two guys in football jerseys walking side by side approached from the opposite direction. Kurt moved to one side of the walk and continued on. As they approached, they seemed oblivious to him, and the one closest to Kurt bumped him with his shoulder as he passed. Kurt’s feet nearly went out from under him in the dewy grass. He managed to stop himself, but not before he twisted his ankle slightly.

“Watch where you’re walking, Short Stuff,” the guy called back. He then turned to his friend, and they laughed as they continued on.

“Are you okay?” a girl asked as she hurried up to him. “I saw the whole thing and I’ll be a witness if you need one,” she added seriously. “I’m Cathy. Pre-law.”

“I guessed that. The pre-law part, not the Cathy. And I’m all right, thanks.” His ankle hurt a little, but he’d be fine. His mother had sent him with a first-aid kit that would have every doctor’s office in four counties green with envy. She was a hypochondriac and liked to project her tendencies onto her only child. “Thank you.” He made sure he still had all his stuff.

“Where are you headed?” Cathy asked with a huge smile.

“I have a biochemistry class in the science building. This is my first term here, so I’m still learning my way around.” He brushed off his pants. “Where are you going?”

“Calculus class,” she answered and pointed to one of the older buildings. “I’ll see you around,” she said with a smile and then headed off, and Kurt made his way, definitely a bit more slowly, toward the science building. He found it easily enough and climbed the stairs to the room indicated on his schedule. He’d been expecting a lecture hall, but his room turned out to be a normal-sized classroom with rows of long, curving tables and chairs. He took a seat and began pulling out his things for class.

Other students began to arrive, and the room filled quickly. Of course, he didn’t know anyone, but he smiled at the girl who sat on one side of him. She smiled back and began getting ready for class. The students quieted when the door opened at the front of the room and a teaching assistant approached the podium.

“Good morning. I’m Professor Brendon Marcus.” Kurt looked around to see if this was a joke, but the other students didn’t react. “This is Introduction to Biochemistry, and we’re going to be exploring the chemistry of life.” He passed a stack of papers to one of the girls in the first row. “The syllabus is coming around. It includes the reading lists as well as required experiments, field work, and term-paper requirements.” The professor turned toward Kurt as he talked, and Kurt’s heart missed a beat. He was adorably beautiful, with incredible blue eyes. Kurt looked away and admonished himself.

The syllabus had just reached him when the back door opened and someone came in. The guy came down the row and took the seat next to Kurt, so Kurt grabbed an extra copy of the syllabus and handed it to him. It was the guy who’d knocked him off the sidewalk.

“Hey, Short Stuff,” the huge guy whispered as he took the stapled pages. Kurt looked around exaggeratedly. “What’s going on?”

“Nothing,” Kurt said, turning toward the football player. “Just making sure this isn’t Planet of the Apes.” Then he turned and faced forward with a slight smile as the professor continued with his introduction and then went into his first lecture.

Kurt took notes and did his best to ignore the guy next to him. As soon as class was over, Kurt gathered his things and made for the exit well ahead of the lumbering ape with no manners. He zipped down the hall to the lab. There were two lab periods for the class, and the one directly after class fit his schedule. He got out his workbook and a notebook. Then he pulled his lab coat out of his bag and put it on.

Dr. Marcus came in a few minutes later. “Many professors have assistants who conduct their labs. I don’t.” The door opened at the back of the room. “It’s good of you to join us, Mr. Samuelson,” the professor said. “Now let’s get started.” Kurt turned and groaned inwardly as the ape stood at the station next to his. “Pair off into teams quickly.” No one moved, and Kurt groaned.

“Looks like it’s you and me, Short Stuff,” the ape said with a smile that Kurt wanted to smack off his face.

“Fine,” Kurt said and turned away to pay attention to the professor. He couldn’t do anything about his lab partner, but he’d make sure his work was correct and complete no matter what.

The lab was almost a disaster not once, but three times. They had to work together, but Ape Boy seemed more interested in everything around him than the lab work, and when Kurt needed an extra set of hands, Ape Boy almost poured the solution in too quickly. Only Kurt turning the stopper in the nick of time prevented them from having to start all over. By the end of the period, Kurt had his results and had taken all the notes he needed for the write-up. He cleaned up their station. “You didn’t take any notes,” Kurt said to his partner. “How will you be able to do your write-up?”

“I’ll use your notes, Short Stuff.”

“I don’t think so, Ape Boy,” Kurt said. He finished putting the last of his papers in his bag and headed out of the room. If he was lucky, maybe the guy would drop the class. Kurt would be better off doing everything alone. The bell rang, and Kurt hurried to his next class. It had to be better than the one he’d just left.