Chasing the Dream is releasing on Monday and I thought I’d give you all a sneak peek.  I really hope you enjoy it!!! 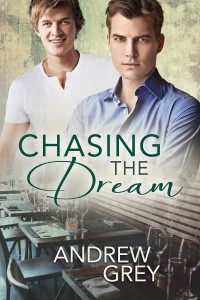 Born with a silver spoon in his mouth, Brian Paulson has lived a life of luxury and ease. If he’s been left lonely because of his family’s pursuit of wealth and their own happiness, he figures it’s a small price to pay for what he sees as most important: money.

Cade McAllister has never had it easy. He works two jobs to support himself, his mother, and his special-needs brother. They don’t have much, but to Cade, love and taking care of the people who are important to him mean more than material possessions. When Cade is mugged in the park, he can’t afford to lose what little he has, and he’s grateful for Brian’s intervention.

Cade is given a chance to return the favor when Brian’s grandfather passes away and Brian’s assets are frozen. Cade offers Brian a place to stay and helps him find work, and the two men grow closer as they learn the good and the bad of the very different worlds they come from. Just as Brian is starting to see there’s more to life than what money can buy, a clause in his grandfather’s will could send their relationship up in smoke.

Getting out of the car, he looked up at the mansion and wondered why in the hell everything about his family was as fake as they were. Nothing had any permanence, and houses, cars, people, all seemed fleeting. Once he’d closed the car door, he pulled his jacket a little tighter and strode up to the door. It opened as he got closer.

“Thank you,” he answered automatically. The one he felt sorry for was her. Mrs. Carson had worked for his grandmother and grandfather for years, and now the nearly sixty-year-old woman was apparently stuck working for his uncle. He smiled at her, remembering how she always had cookies and milk ready for him when he visited his grandparents and never forgot a single Christmas until he went off to college. Each year she always placed some small gift in his hand and then pressed her fingers to her lips so he didn’t tell anyone. They were never expensive, but he knew they always came from the heart. Too bad he no longer had one.

“Well, Brian is here, late as usual, so I think we can get started,” his uncle said, holding a glass of something clear, probably gin, with a few cubes of ice. “Dad’s funeral is scheduled for Friday, and it seems he planned it himself. At least that’s what his lawyer said a few hours ago. It’s apparently a simple service and interment next to Mom.”

Brian took an empty chair as far from his uncle as he could and spent most of the time looking out the windows.

“I was also informed that the reading of the will is to be on Saturday.”

“There goes your golf game,” Brian said just loud enough for everyone to hear. “What a shame. At least the greens will be safe from your divots for one day.”

His uncle ignored him, but Brian saw his hand clench and hoped the damned glass broke.

“We’ve been asked to be there at ten… sharp.”

His uncle glared at him, and Brian turned to look out the window at the sparkling water of Lake Michigan once again. He loved the view. Of course, that was probably why his uncle bought the place. Looking one way you could see up the coast to the north, and the other you could see all the way to downtown. It was a unique vantage point because of the shape of the land.

“Are there any questions?” his uncle said louder than necessary. “I do expect some sort of press coverage, so for goodness sake, dress appropriately.”

He knew that was directed at him, but Brian didn’t even acknowledge it at all. “Is this little meeting over?” he asked.

“You could be more respectful,” his aunt Jeanette whispered from next to him. “This is your grandfather you’re saying good-bye to.”

She always made herself out to be the arbiter of propriety and manners, even with a man half her age sitting next to her, expression as vacant as ever. He was probably wishing for all the world he was pumping iron at the gym or something, at least from the way he kept watching himself in the mirror across the room.

“And you could act your age,” he whispered back. “But then again, you must have looked a long time to find someone on your intellectual level.” Brian had decided some time ago that he wasn’t going to take his family’s crap. They were all pretty messed up.

“All right, then…,” his uncle said, and Brian looked at his watch.

What a total waste of time. Uncle Harry always tried to make himself out to be something important and had to be the center of attention.

“We’ll gather on Friday to say good-bye to our father and grandfather.”

How his uncle kept the threatening grin off his face was a miracle as far as Brian could see.

The rest of his relatives began to mill and talk. Brian wasn’t interested in spending any more time with his relatives than he absolutely had to, so he left the room, heading back toward the door.

“Good-bye, Mr. Brian,” Mrs. Carson said as he passed her.

She smiled that same indulgent smile he remembered from when he was a kid. “None of them bother me. I’m only here because your uncle asked me to help during the funeral. After that I’m going to retire. Your grandfather and grandmother saw to it that I’d be able to do that.” She took his hand. “Now that my time with your family is nearly over, I can say what I’ve wanted to say for a long time. Your grandparents thought more of you than you know, and they both loved you very much.”

Brian had no doubt about his grandmother’s love. “He had a lousy way of showing it.” Still, Brian appreciated that she cared enough to say something. He leaned forward, kissing her on the cheek. “But thank you.” He squeezed her hand and left, getting in his car and driving away from the house as fast as he dared.

He wasn’t interested in going home and had no particular place to be. He went back in the direction of downtown and parked outside one of the entrances to Lake Park. This was where he liked to come to think. He locked the car and pocketed his keys. The sun had come out full force, and the wind had died away, so he left his jacket in the backseat and decided to walk for a little while. The park was full of paths, lawns, and glades. It had been designed by Frederick Law Olmstead, the man who designed Central Park in New York, so it had some similar features, including bridges, a lighthouse, sculptural lions, and massive specimen trees. Parts of the park were magical, and Brian headed toward one of the areas with an amazing bridge that afforded a commanding view of the lake.

He walked halfway across, past the stone seating area and the huge lions, onto the bridge, and stood in the middle, staring out at the water. People passed around and behind him as they walked, but he paid them little attention. It had been a shitty day on top of a crappy night, and the rest of the week wasn’t going to get any better.

His phone interrupted the beginning of his downward thought spiral. “Hey, Bri-Bri, it’s Peter. Do you want to go get some dinner and then take in a club?” He paused a second. “Oh, shit, I forgot about your grandfather. I should….”

“No. I’d like to go out.” At least it would give him something to do and think about other than his stupid family.

“What are you doing?” a man called in a rather high-pitched voice.

Brian turned and saw a man racing full -bore in his direction.

“Stop him, please,” another man called.

“What’s going—” he heard Peter say and then dropped his phone as the guy barreled into him. Brian prevented himself from falling hard by grabbing the guy and taking him down with him, using him as a cushion. Brian recovered quickly, but the guy who’d been on the run wasn’t as fast, remaining still as a small man raced up to them.

“Bastard!” he yelled at the fallen man and grabbed what he was still clutching in his hands. “Steal my wallet.” The small guy kicked the other one and looked about to beat him half to death.

Brian grabbed the little man’s arm. “Leave something for the police.” He found his phone on the bridge decking and made a call. The guy on the ground started to get up. “I wouldn’t do that if I were you, or I’ll let him at you again, and I think he’s ready to kick your ass into next week.”

He looked at Brian. The man was stoned out of his mind. Brian was well aware of what that looked like. The police arrived on foot, racing up and taking charge of the situation. They quickly ascertained who the real victim was and hauled the stoner off toward a police car.

“Thank you,” the small man said, and Brian noticed his huge blue eyes and medium-length blond curls. He could probably use a haircut, but he was cute nonetheless.

One Response to “Coming Soon – Chasing The Dream”