A Courageous Ride is releasing March 31 and I am already getting a wonderful response from the early reviews.  Both Sid Love and Mrs. Condit and Friends have given it wonderful reviews.

With this story, I decided I wanted to create two different characters form two different worlds, throw them together and see what happened.  What I got was a story that really spoke to me about the power of love and deciding what was truly important.  I also got to explore the therapeutic aspects of love and healing on many levels. 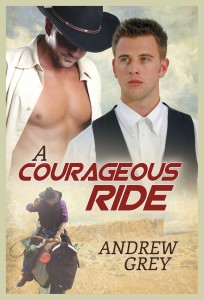