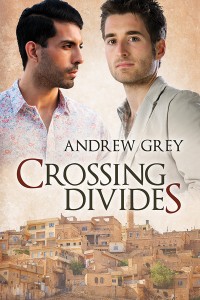 I thought I would give all of you an early excerpt of Crossing Divides.  I hope you really enjoy it be sure to take advantage of the sale at Dreamspinner through December 21.  This story is very special to me and I put a lot of myself into it.  Enjoy and Happy Reading!

The men were talking quietly, some laughing and joking. Carter had initially thought that strange, but soon realized it was their way of relieving stress. They needed some semblance of normalcy, and acting normal—talking, laughing, playing little jokes on each other, or on the American in their midst—was a way of doing that.

At one point, all of the men looked at each other and stood up. As a group, they all faced the same direction, toward Mecca, knelt, and quietly began to pray. Carter stood away from them to give them privacy. He knew they had missed the multiple calls to prayers that had occurred throughout the rest of the Muslim world that day, and now they were saying their own words of thanks. Carter closed his own eyes and said a few words to the god he’d grown up with.

In the past few years, he hadn’t been a religious man, but this experience had touched something inside him. He needed someone to be in charge of things, and he prayed these men would be granted whatever it was they were praying for. When he was done, Carter opened his eyes. Nemat was at the back of the group, kneeling with his head very close to the ground. Carter stared at him for a few seconds and then turned away. He’d seen the men pray before, but usually he tried to get farther away so as not to intrude. But he had no place to go here.

Carter listened and watched Nemat, his mind filling with thoughts he should not be having, not here, and certainly not while Nemat was praying. Carter turned away and silently found a place to sit. He didn’t move or make a sound until the others stood up. Then he opened his pack and pulled out a bedroll. He spread it on the floor and the others did the same. Nemat spread his next to Carter’s. Carter lay down and felt Nemat do the same. He wanted to turn toward the wall so he wouldn’t be as aware of Nemat next to him, but no one slept with their face away from the door or opening for any reason. It could cost any of them their lives.

In the darkness, Nemat lay just in front of him, his body a dark, alluring curve. Carter closed his eyes and tried to keep his mind on what he was supposed to be doing, the story he was to be working on, the fact that danger lurked just outside the building. Every few minutes, Carter would catch a glimpse of the man standing guard over all of them just outside the door. But no matter how much he tried, his thoughts returned to Nemat and how close he was.