With the release of Electrochemistry I thought I would give you all a brief excerpt from the story.  I love this opening because everyone should know or experience someone like Jordy. 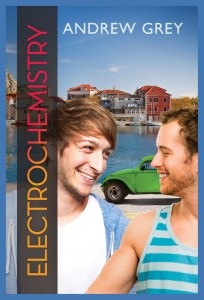 Science major Brad Jergens notices Jordy Fleming at school and at the grocery store where he works, but with the heat Jordy’s boyfriend emits, Brad doesn’t think he stands a chance. When Brad’s parents drag him along on a cruise, he and Jordy literally crash into each other, and the chemistry between them sends sparks flying. Unfortunately, as the weeklong cruise nears an end too quickly, Brad’s left to wonder if their mutual attraction will dissipate on a Caribbean breeze as soon as they return to dry land.

I knew I would always remember the first time I saw him. The only job I could get was at the Giant, and on weekends I had the graveyard shift. I got paid extra for it, and there weren’t a lot of customers, so mostly I stocked the shelves or manned the service desk. I got a lot of studying done because there really wasn’t that much work to do. Anyway, I was standing outside the front doors, taking a break, when he pulled into the parking lot in a green VW Beetle convertible. Hezipped past the front of the store, “I Will Survive”  blaring from the car speakers and him singing along at the top of his lungs… off-key. I couldn’t help smiling as sheer joy radiated in every direction.

The song ended, and then everyone within hearing distance was treated to an encore of Cher’s “Turn Back Time.”  The exuberance continued, spreading like sunshine just breaking through thick clouds. When the song was over, I listened for another, but the parking lot grew quiet. After a few seconds, I realized I was holding my breath, waiting for more, but none came. The night returned to normal, the mundane returning after a moment of excitement. But I wasn’t ready to go back inside. Instead, I checked my watch and waited, looking at where the car had tucked in between two others. Then I saw him: a small, slight guy walking toward the store, swinging his hips like the music was still playing. I looked for an iPod or smartphone, but saw nothing. The music must have been in his head, and he was just loving it. Hell, so was I.

There hadn’t been many times in my life when I’d encountered a presence that exuded unapologetic and uncontained joy, but this was one of them, and it pulled me in its wake. Before I could think, he’d passed through the sliding doors, and I followed after him, because what choice did I have?

In the fluorescent light, he was stunning: slight, but well proportioned, wearing flip-flops on perfect feet. My gaze traveled upward past nice calves to a tight little butt that swung back and forth as he walked. He had a tiny waist, then his back