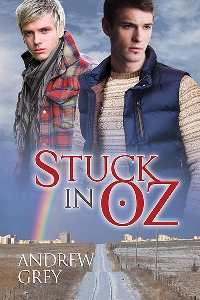 Jeremy Radcliffe could hardly see out the windshield. The wipers moved back and forth, but did little good. He turned on the radio and managed to find a station. The snowstorm had come out of nowhere, and according to the announcer, it was going to last for a while. Jeremy pulled off to the side of the interstate and got out, the door protesting the movement. He leaned over the windshield and wiped it clean of the wet snow with his bare hands. He cleaned the wipers and then jumped back into the car. Judging by the last sign he’d been able to read, the exit he needed was just ahead and he didn’t want to miss it.

It was easier going now that he could see, but he wasn’t sure how much longer that would last with the wind blowing right at him. He saw the sign for Wamego and breathed a sigh of relief. Putting on his blinker, he saw the lane for the exit materialize next to him and he slowly made his way over. He should have known better than to try to drive across the country in January in a car held together with duct tape and prayers. At least the heater was working, and he’d had the oil changed last month before everything went to complete and total hell. He pulled to a stop at the end of the ramp and saw the sign. It read that Wamego was to the left. His heart sank when he saw that he still had nine miles to go. The interstate had been bad enough, but the smaller roads were sure to be a worse mess. Jeremy put on his signal and made the turn.

Thankfully, the snow was no longer blowing right at him and the visibility picked up since the wipers could keep up now. The road ahead was dark and he kept to a safe speed, thankful that Petey was asleep in his car seat in the back, completely oblivious to the near panic that ran through Jeremy. He took a deep breath and did yet another mental inventory of what he had. Pushed up under the seat was all the money he had in the world. He’d sold everything he possibly could. He’d even let his cell phone lapse because paying the bill would have eaten into his dwindling supply of cash. He really regretted that now. After his mother’s funeral, he’d realized Petey, his little brother, was all he had in the world. In going through his mother’s things, he’d found the address and number for her brother in Kansas, his Uncle Milt. Jeremy had called him. Uncle Milt had sounded nice on the phone, and he’d said he’d help Jeremy if he needed it. Jeremy had thanked him, thinking he was just being polite, but then the world had caved in on him. He’d called again, not knowing what else to do, and his uncle had told him to come to Kansas.

Jeremy continued driving over the unfamiliar roads, becoming more and more nervous by the second. It seemed as though he’d been driving forever when the blowing snow got a green tinge and then turned yellow. Jeremy pressed the brake and prayed the car stopped. It slowed and he rolled to a stop at the traffic light. Letting out a sigh, Jeremy turned to check on Petey, and when the light turned green, he slowly inched his way forward. Some of the blowing snow abated in the shelter of the buildings, and Jeremy was able to see somewhat better. He pulled off the road and into a parking space. “We made it, Petey,” Jeremy breathed, grateful his little brother was still asleep. He shifted on the seat and pulled out his wallet. There were just a few dollars in it, but the most important thing was his uncle’s phone number, scratched on a small Post-it Note.