The next installment in the Carlisle Cops series is releasing in exactly a week.  I really think you are going to love this story.  It tugged at my heart as I was writing it.  In celebration of the upcoming release, I thought I would offer you a sneak peek.  Enjoy 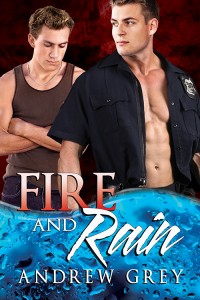 Since the death of their mother, Josten Applewhite has done what he’s had to do to take care of his little brother and keep their small family together. But in an instant, a stroke of bad luck tears down what little home he’s managed to build, and Joss and Isaac end up on the streets.

That’s were Officer Kip Rogers finds them, and even though he knows he should let the proper authorities handle things, he cannot find it in his heart to turn them away, going so far as to invite them to stay in his home until they get back on their feet. With the help of Kip and his friends, Joss starts to rebuild his life. But experience has taught him nothing comes for free, and the generosity seems too good to be true—just like everything about Kip.

Kip knows he’s falling hard for Joss, and he likes the way Joss and (brother) make his big house feel like a home. But their arrangement can’t be permanent, not with Joss set on making his own way. Then a distant relative emerges, determined to destroy Joss’s family, and Kip knows Joss needs him—even if he’s not ready to admit it.

The last house on the first block had been empty for a while, so when Kip saw activity outside, he slowed to a stop. A small figure stood at the side of the porch. Kip recognized him as Isaac and pulled the cruiser to a stop. He got out, forgetting his hat, and hurried up to the porch. Isaac stepped back until he was pressed to the wall of the house, holding his blanket, panic in his eyes, a thumb in his mouth.

Isaac blinked at him a few times and then pointed to the side of the house.

Kip was about to walk around the side when he heard a scuffle of some sort. He called in for backup and then turned to Isaac. “Can you sit over there and make yourself really small?”

Isaac nodded and backed away in the corner of the porch, practically curling into a ball. The scuffing sound came again, followed by a muffled cry. Kip pulled his gun, slowly making his way around the corner.

Two figures were beside the house, and one had the other pressed to the wall.

“Stop right there!” Kip shouted and raised his gun.

“There’s nothing to see here,” a gruff voice growled back.

“Police. Step back and get on the ground,” Kip said.

“It’s nothing, officer. My boy and I were just having a conversation.”

Kip wished he could pull his flashlight, but he didn’t want to break his concentration. “Then let him speak for himself. Is that you, Jos?” He heard a mumble, but that was all. “Let him go. Now!”

“He and I were just having a little fun.” The voice was softer now, but Kip wasn’t buying it.

“I said back off. I can hit a fly at this distance, so I’ll have no problem putting a bullet in your ear. Get on the ground, arms and legs out where I can see them. Now!” Sirens sounded in the distance, and Kip was relieved that backup was on the way. He saw the guy looking in various directions. He was starting to panic now. Kip knew the signs; he was looking for a way out. “You move, you die.”

The man released Jos and slowly got down on the ground. Kip saw Jos reach down and realized he was pulling up his pants. Jesus Christ, he hoped like hell he’d gotten there in time. The other man’s pants were in place, so he prayed he had. Other cars pulled up, and Kip saw that Jos looked about ready to spook.

“He’s fine. He’s up on the porch. He told me where to find you.” Kip got his cuffs and clasped them on the man. “Stay there.”

“Get up and it’s resisting arrest. I’ll start by tasing you. That should be a delight.” Other officers came into view, and Kip holstered his gun. Thank God one was Red. He told them what was going on and asked them to lead the suspect to the car. Red was reading him his rights clearly and carefully just before they put him in the car.

“Good thing you got here fast,” Kip said to Red

“What about the other one? Did you know there’s a kid on the porch too?”

“Yeah. I encountered them during that homeless call I had earlier at Hansen’s.” Kip looked over at Jos, who was doing his best to comfort Isaac, who held on to him and whimpered.

“Do you think the bruiser got to him?”

Kip wasn’t going to shiver in front of his colleague. “I don’t know. I hope to hell not. Jos’s sole concentration seems to be on watching out for Isaac, and I think if he thought it would keep Isaac safe, he would do just about anything.”

“Well, go find out. Because if we want to keep this piece of work off the streets, we have to have something we can charge him with other than trespassing. We’ll take him in and get him settled in a nice dry cell. Maybe with him gone, you’ll get something out of him.” Red motioned with his head to Jos, who stood with Isaac in his arms, singing the same lullaby he had before.

Kip slowly walked over to where the two of them stood. “Jos, what happened?”

He didn’t answer, standing taller and staring Kip down. Of course it didn’t work, and Kip simply stared back and repeated the question, adding a fierceness to his tone until Jos began to shift from foot to foot.

“Are you going to follow us around all night?”

“If I have to. Now tell me what happened.”

“I am not his boy,” Jos said defiantly.

Kip waited for him to continue, but he didn’t. “What’s his name?”

“Tyler Adamson, but I don’t know if the name’s real or not. He laid claim to me about a week ago, and I’ve tried to keep Isaac and me away from him. I did good too, until he found me a while ago.”

“You mean did he manage to fuck me? No. You were in time to stop that.”

Kip suppressed a sigh. “Did he hit you or grab you?”

“He pushed me against the house. That hurt. He threatened to hurt Isaac if I didn’t do what he wanted. Said he’d cut his… you know off. The guy’s a pervert—likes guys and girls, or so I hear, but wants it rough and likes them unwilling, if you know what I mean. Word on the street is that the more they fight, the more he likes it.”

“Okay. I need you to come to the station with me so you can tell me what happened. That way I can keep him in jail.”

“What about your friend? Is that offer of food still good? Isaac’s really hungry, and….”

Kip would make sure they ate. That wasn’t optional now, as far as he was concerned. “Here’s the deal. I’ll make sure you both eat all you want. You need to tell me what happened so I can get your statement.”

“Then you need to show up at the police station tomorrow morning so you can identify this Tyler Adamson and formally press charges. I have enough for assault, attempted rape, and I’ll see if I can add some more once I have your statement.” Kip stepped closer to Jos. “You have to trust me. I’m not going to hurt either of you, and if you let me, I’ll try to help.”

“Why?” Jos shot back. “Nobody does something for nothing. Never has, never will.”

“Maybe I’m doing it because I don’t want Isaac sleeping on the street. Isaac’s relying on you to take care of him. Are you going to give up a chance for him to be warm and comfortable?”

Kip nodded and checked the time. His shift was just ending. “Then let’s get you in the car. I need to take you to the station so I can punch out and then get my car. I’ll call my friend so he can help you. Donald is a good man, and he said he can give you some things for Isaac—clean clothes, things like that.”

“And you don’t want nothing?”

“No. I don’t want anything from you other than your honesty. Now let’s get in the car so we can get you two fed and then find you a place to sleep, okay?” Kip motioned to the cruiser, and Jos helped Isaac and then got into the backseat without another word.