I’ve been asked for an excerpt of Fire and Snow, the next installment in the Carlisle Cops series of stories.  I pulled this one because it really shows JD’s nature and the kind of heart he has.  I really love these works.  Each of the stories is pulled from a local news story that caught my attention.  I really think you’re going to fall in love with Fisher and JD the way I did.  Fire and Snow releases May 20th!!!  Enjoy!!!!! 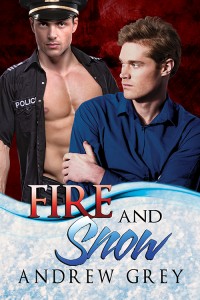 Fisher Moreland has been cast out of his family because they can no longer deal with his issues. Fisher is bipolar and living day to day, trying to manage his condition, but he hasn’t always had much control over his life and self-medicated with whatever he could find.

JD Burnside has been cut off from his family because of a scandal back home. He moved to Carlisle, but brought his Southern charm and warmth along with him. When he sees Fisher on a park bench on a winter’s night, he invites Fisher and his friends for a late-night meal.

At first Fisher doesn’t know what to make of JD, but he slowly comes out of his shell.  And when Fisher’s job is threatened because of a fire, JD’s support and care is more than Fisher ever thought he could expect.  But when people from Fisher’s past turn up in town at the center of a resurgent drug epidemic, Fisher knows they could very well sabotage his budding relationship with JD.

Purchase a copy from Dreamspinner Press

He was hunched and curled into his coat, arms wrapped around himself, chin to his chest.

The man looked up and then lowered his gaze once again, saying nothing.

“Sir, is something wrong? It’s way too late and too cold to be out here. You should head on home.”

“I’m fine. Doesn’t matter, anyway. No one cares.” He lowered his gaze once again and continued sitting where he was.

“You’ll be a lot warmer and safer if you go home.” JD was becoming concerned. “I can help if you like? Can you tell me where you live?”

“Of course I can. But it doesn’t matter. Nothing matters.” He got to his feet. He seemed steady enough. “People are crap, you know that? Everyone takes advantage of everyone else, and no one gives a crap about it.” He took a few steps, weaving slightly, and then he straightened up and headed off toward the courthouse. “No one cares about anything or anyone.”

“Do you need some help?” JD asked.

“No. There’s nothing you can do.” He walked off and JD watched him go. Something wasn’t right, but he was cold and the guy seemed harmless enough. JD went back to his car and slowly drove down the road. He saw where the man turned, and then watched as he went inside one of the apartment buildings in the first block of Pomfret.

His phone rang, so JD pulled to a stop before answering it. “You heading back to the station?” Red asked.

“Yeah.” He checked the time.

“Terry is going to meet me at Applebee’s. They’re still open, and we can get something to eat.” Red had been nice enough to befriend him when he’d joined the force six months earlier.

“Sounds good. Let me get back and finish up. I’ll meet you there.”

JD drove back to the station, checked in, and then left. The snow barely covered the ground, but it was enough to make him itchier about driving. He knew people here didn’t think too much about a little snow, but he’d rarely driven in it back home. As he clutched the wheel, he tried to remember the last time he’d actually driven in snow. It must have been four or five years ago.

JD approached Hanover Street and saw a hunched figure walking back toward the square. JD knew he was off duty, but he turned left instead of right anyway. He watched as the man went back to the same bench and sat down. There was something very wrong.

JD pulled off the road, then got out and jogged across the street to where the man sat. “I thought you’d gone home,” JD said gently.

“Dude, it’s really cold, and you’re going to get sick.” JD helped him to his feet. “It’s also really late. You need to get home where it’s safe and warm.” He hoped the guy wasn’t sick, but he couldn’t leave him out in this weather. “When was the last time you ate?”

The man shrugged. JD looked at his arm, checking for a medical bracelet. He’d had a friend who acted like this sometimes, a little loopy and strange. He’d been diabetic, and when his blood sugar got wacky, he’d act really out of it. “Why don’t you come with me, and I’ll see about getting you something to eat.”

“Okay,” the man agreed, and JD helped him walk across the street. He got him into the car, wondering what Red was going to think when he showed up with a stranger. The guy sat quietly, lightly fidgeting with his hands as JD drove to the edge of town and pulled into the restaurant parking lot.

“Let’s get you something to eat, and then maybe you’ll feel better.” JD had committed himself now. He’d crossed a line between officer and public a long time ago—and if this turned out badly, he could be in a hell of a lot of trouble—but something told him the guy wasn’t dangerous, just a little confused.

He parked and they got out, the man following docilely.

Red met him at restaurant door, staring quizzically. “Who’s this?”

2 Responses to “Fire and Snow is Ready to Take The Carlisle Cops by Storm!!!!”