Thank you for hosting me on your blog! It’s my first-ever guest blog post, so I’m glad for the opportunity to share a little more about me for the first time. I’m relatively new to the M/M publishing world, having only started to publish M/M erotica in 2013 and my first romance novel in 2014. I’ve written gay fiction for years, but I never thought others would be interested in reading it. It’s been an exciting new career!

Today, I wanted to talk about the difficulties of writing characters who are billionaires. It may seem like a one-percent problem, but from a writer’s point of view, billionaires can be frustrating!

First off: do you know any billionaires? Chances are good you said “no” to that question, but you might know a millionaire or two… and you might not even know it! Only about 1,800 billionaires were counted in the world last year, but over ten million households are worth at least a million dollars in the U.S. Alone!

If you were a writer looking to write an exclusive island resort for rich men who love men, limiting yourself to billionaires would be most unwise. After all, if every billionaire in a romance novel existed in real life, our world economy would look very different! Not to mention the problem of realism – of those billionaires, how many are gay men? Certainly not the couple hundred guests an island of this size would need.

It only makes sense to include millionaires, especially those who are rich enough to have stopped working for someone else and who might seek out time in the surf and sand to fill their summers.

That brings up the next obvious point from a writer’s point of view: money and the problems it creates for plot. Money can be boring, because a man who has a full bank account has little to lose in terms of status, power, access to healthcare or food or housing, or even many interpersonal conflicts. The story has to focus on internal conflict, therefore, in order to avoid plot holes.

Eli Black, the billionaire whose story this is, has to have something else to lose, and the most obvious choice is his heart. The story of a man who thought he had it all only to walk in on his soon-to-be ex-fiancé with another man is a trope, but for good reason. Money won’t make your fiancé more faithful, and it won’t heal a broken heart!

It can, however, rent you a mansion on an exclusive island where your best friend reminds you that the men are hot, life is slow and easy, and parties with your friends and acquaintances (the circle of ultra-rich gay and bi men is very small, after all) can keep you busy.

For Kevin Walker, money is a lot more important. He had to find a job at a second-rate bakery after the gourmet bakery in which he learned his craft shuts down, but now he’s dreaming of more. When his best friend Troy tells him they’ve got the chance to make a lot of it in one summer if he’s willing to work on an island where the men will expect him to flirt, he doesn’t have a problem with it.

Instead, Kevin’s conflict comes from his own self-image. He thinks he’s a straight man who just hasn’t been interested in anyone else because he’s been focusing on his business dreams. He has to come to terms with himself before he can even admit to Troy what’s going on.

Therein lies the conflict of the first book: both men drawn together by the initial spark of chemistry and the sweet, overly-trusting nature they pick up on in each other, yet reluctant to admit to their best friends what is going on. For Eli, it feels too soon after the breakup, and for Kevin, it feels too sudden a discovery.

Although money is used to bring them together, once they get on the island and get to know each other, it stops being as much of an imbalance of power between them. In the game of love, everyone’s an equal… and sore losers like Eli’s ex rarely just quit.

I hope you enjoy the first sweet summer story of these two, and a little island heat of your own. At the very least, hopefully you can get to a beach or boardwalk to relax your cares away for a hot July afternoon or two. I know I’ll be looking for some seashore relaxation, whether or not I meet millionaires along the way! 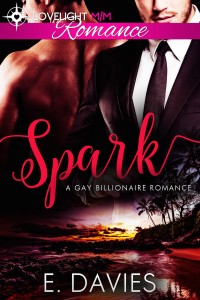 Once a gourmet baker designing elite desserts, Kevin Walker now works at a second-rate bakery and dreams of opening a dessert bar with his best friend, mixologist Troy. When Troy secretly applies for a Main Street storefront on Ember Isle, an exclusive gay millionaires’ retreat, they’re accepted – despite how Kevin’s always said he’s straight. Kevin’s not worried; he’s secure enough in his sexuality. He’s never been with a woman, but then, he’s never found the right one… right?

Billionaire Eli Black thought he had it all until he walked in on his high-rolling actor boyfriend Tom rolling in the hay with another man. His closest friend Dean drags him to Ember Isle to make him have fun while they wait for Tom to make the news public. He doesn’t think he can flirt again, but before he can even set foot on the island, he’s proven wrong. When he later spots a dessert bar and can’t resist a peek before opening time, the man he met earlier catches his eye. He wants Kevin over his knee and in his bed… and he doesn’t believe for a second that Kevin is straight.

Eli and Kevin try to understand their intense mutual attraction at first meeting, and they’re drawn together for fun in the island heat. Wires cross afterwards as they realize they’re more than a one-night stand, yet Kevin thinks Eli is lying to him about being single. Can their budding relationship survive its first test?

Find out more about Spark on LoveLight Press or Amazon.

When Kevin heard a voice that was much too deep and sexy to be Rube’s call out, he sighed with exasperation and shook his head. They won’t frigging stop. “We’re closed,” he told the customer from the kitchen. “No customers welcome yet. Come back on the weekend.”

Then, he let out a breath and tried not to stress. He set aside his oven mitts and ducked out of the kitchen through the doorway to follow up on that statement with something a little more welcoming.

Of course it was him.

The gorgeous man who had made him stop and think twice before stepping out of his personal space – the one who clearly liked to tease and infuriate and draw out any bit of chemistry, who would probably be fucking hot in bed for all the right reasons if Kevin leaned that way…

Kevin blushed at the thought.

“Someone’s crabby this morning. Is now a bad time?”

He’s never going to let that go. Kevin sighed at the gorgeous man, but all he got was a broad grin in return. “God, that’s going to follow me around all summer now,” he complained, but his mind didn’t linger on the flirtatious teasing for long. “Yeah, I’m… everything’s…”

He heard his cake timer go off. Shit, shit, shit, I can’t let that go any longer, my tests are all timed… Missing it by a minute would mean another test cake.

And that was why customers weren’t supposed to be here yet. Kevin scolded him by saying as much, but the hot guy didn’t seem very dissuaded.

“I’ll come back, Kevin,” his would-be customer promised. When he made eye contact, Kevin couldn’t look away. He knew he was supposed to, but there was something about the way those eyes flickered between his own, catching and holding them… practically commanding him to stay in place.

Then, the other man winked.

Oh, fuck, Kevin was too straight for this. Or am I? Kevin blushed, trying to ask for the man’s name, but he was already gone.

He hurried straight to the oven to pull out the cake, swearing under his breath as his heart raced and trying not to burn himself on the oven door or the pan.

There was no way that had just happened.

He’d never had that kind of reaction to a man – or anyone – and now it had happened with this guy twice in a row. Once on the dock, when his soft, large hands had wrapped around Kevin’s and the warmth of skin on skin had made him catch his breath, and now his eyes alone had had that same effect.

His hands trembled as he pushed a toothpick into the cake and pulled it out.

Oh, shit. Kevin threw away the toothpick. He leaned over the counter and folded his arms, letting his head thump down onto them. He didn’t have time for this. He didn’t want to want to explore this.

None of that mattered. His desire was still there, wanted or not, and it was strong.