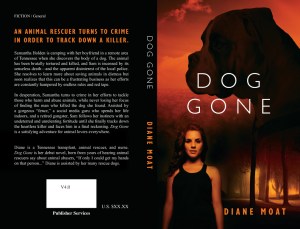 Have you ever seen a report of a terrible animal abuse case and thought, “Someone should stop that person from ever being able to harm another animal.”? Then this novel is for you.
Sam Holden is a young woman who comes across a dog after he has been tortured to death. This starts her down a path of learning about animal rescue. Along this path there are times where she must color outside the lines in order to stop an abuser from harming animals. In order to do this, she must enlist the help of some unexpected characters. This includes a mob family retiree, a housebound social media whiz, and a gorgeous “fence” for stolen goods. She needs the fence since she funds her illegal projects by thievery. Sam’s on again, off again boyfriend doesn’t know about her recreational projects. We join Sam as she balances her personal life, thievery and escalating quests to help animals in need. Throughout all of her competing jobs, she never loses sight of her search for the man who started it all by killing the dog she found by the side of the road. Our story culminates when Sam finds the man, with all points of her life intersecting in an amazing finish.

Today, the man drove his oldest pickup truck, because of the smell. None of his family ever got in this truck ‘cause of how filthy it was. He liked it that way.

The dead dog lying on the seat next to him no longer resembled the dog he’d “adopted” two months before. The family he’d met back then—who had owned the animal—was so eager to get rid of the dog, they jumped when he tol’ them the story of wanting the dog for his ten-year-old boy. He seen the family on Facebook, advertising the dog to be “free to a good home.”

They didn’t ask him a single question, and he was gone in less than ten minutes. He knew the type. The dog probably looked cute when they first got him, and then prolly peed all over and chewed their shoes. Hit the road, Jack.

The dog spent the next two months at his hunting cabin, along with four or five others. The number changed up, depending on how many died and how many he was able to “adopt.” He went out to the cabin every other weekend, and sometimes he could sneak away for an occasional weekday. His wife called it his “down time.”

He didn’t worry about leaving the dogs any food when he wasn’t there. They were all kept together in one pen. They could hold out until he returned, starve, or eat each other. He always made sure at least one or two small dogs were in the pack, for that last possibility. Sometimes, he made bets with himself as to which dogs would be alive when he returned. Surprisingly, the small dogs proved to be tougher than he’d expected, and seemed to last longer than the bigger dogs.

The dog next to him, too, had lasted longer than he had bet on. He had enjoyed seeing him go from being a happy and hopeful dog, to one who wouldn’t even open his eyes when the man came near. The dog was so hungry the week before, he had eaten the canned dog food the man had mixed with broken glass. After that, he shot out the dog’s front legs, knowing the dog would be dead when he returned.

Once a dog was dead, he didn’t want it on his property anymore, not even buried. But he was also lazy and didn’t want to dig a hole. So he went with what had worked in the past. He would drive down a deserted dirt road and dump the dog out. He hadn’t seen another car in over five minutes now.

He’d been driving around campgrounds that weren’t s’pposed to be opened for the summer yet. He had seen one parked camper a few minutes back, but that was it. As he rounded a corner, he slowed down and opened the passenger door. One shove and the dog’s body flew out of the car as if it wanted to be released. He slammed the door shut and accelerated with hardly a pause.

He wasn’t worried anyone would trace the dog back to him. No one would care enough to try. In all the years he had been “adopting” dogs and dumping their bodies, not once had anybody questioned him.

The man drove away, confident no one would care about this one dog.

He couldn’t have been more wrong. Diane is a Tennessee transplant, animal rescuer, and nurse. Dog Gone is her debut novel, born from years of hearing animal rescuers say about animal abusers, “If only I could get my hands on that person…” Diane is assisted by her many rescue dogs.