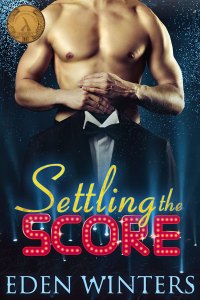 Outed and dumped on national television by his rising star boyfriend, Joey Nichols must face the bigotry of the locals in his small Southern town alone. His dreams of a happy ever after lie crushed at his feet.

Novelist Troy Steele has an axe to grind against Hollywood heartbreaker types. Transforming Joey into a gorgeous, unobtainable hunk would be payback worthy of Troy’s poison pen. It’s a brilliant way to get back at Joey’s image-obsessed ex-boyfriend and the movie producer who’s mutilating Troy’s novels.

What begins as simple revenge may tangle them together in something far more complicated. Living well may be the best revenge, but Troy and Joey could rewrite that to loving well.

Gods, but Joey was cute when flustered. “I can’t seem to get a feel for David’s dialog with his mother. How would you tell someone that you’re not upset?”

No, not truly Joey-speak. “In Southern, please.”

“Still not right.” If Troy de-Southernized the boy he’d never forgive himself.

“That don’t bother me none?”

There! Now he sounded authentic. “Perfect. Thank you, Joey.”

Ah, Joey’d nearly lost the impulse to call Troy “sir”. In a way, Troy missed the charm. “When David first meets Heather, her hair is pulled back into a ponytail and she’s eating an ice cream cone outside the local diner. He finds her adorable.” Instead of Heather, Joey appeared in his mind, in blue jeans and a tight tank top—eating an ice cream. Every swipe of his tongue…

“Thank you, Joey.” Troy reached beneath the desk to settle his rising erection into a more comfortable position.

What was that phrase he needed? “Joey?”

Should Troy be happy or sad to have succeeded in getting Joey not to say “sir”? It was a Southern thing after all. “David’s childhood rival isn’t incredibly bright…”

“Dumb as a bag of hammers? Dumber’n a rock? Ain’t the sharpest tool in the shed?”

“Joey, in the book David has had one lover, Heather, that is, until she left, and then he went on a rampage. Was Riker your first? Umm… you’re free to tell me it’s none of my damned business if you’d like.” Troy paced before the fireplace. For the book. I only want to know for the book. And if I keep telling myself that I might come to believe it.

Even from across the room, he heard Joey’s gulp. The silence stretched between them. He opened his mouth to say, “Never mind.” Before he got the words out, Joey answered with another question.

“How many lovers have you had?”

Troy’s rolled his gaze heavenward. “No.”

Joey scowled and folded his arms over his chest.

Did the man not know the hotness of his confused face? “Now tell me that you honestly believe a man who looks like I do could have so many lovers.”

“It’s not like you’re ugly or nothing.” Again with the lovely shade of blush.

As compliments went, it wasn’t much, but one took what one got. If Troy wanted honesty, he should try giving it. “Fourteen, give or take.”

Damn, Troy should have stuck with the first ridiculous number. “Yes. Trust me, for a single man in this day and age, that’s not many.”

“Really?” Joey was attractive, twenty-three, and occasionally mentioned the Atlanta club scene. Surely he’d passed fourteen a long time ago, even if he’d been in a monogamous two-year relationship. Riker had left months ago.

Already associating Joey with David in his mind, Troy assumed they’d both sowed a few wild oats in the aftermath of their breakups.

Defiance blazed in Joey’s eyes. “One.”

“Excuse me?” Troy couldn’t help goggling. One? Only one? You will know Eden Winters by her distinctive white plumage and exuberant cry of “Hey, y’all!” in a Southern US drawl so thick it renders even the simplest of words unrecognizable. Watch out, she hugs!

Driven by insatiable curiosity, she possibly holds the world’s record for curriculum changes to the point that she’s never quite earned a degree but is a force to be reckoned with at Trivial Pursuit.

She’s trudged down hallways with police detectives, learned to disarm knife-wielding bad guys, and witnessed the correct way to blow doors off buildings. Her e-mail contains various snippets of forensic wisdom, such as “What would a dead body left in a Mexican drug tunnel look like after six months?” In the process of her adventures she has written sixteen m/m romance novels, has won several Rainbow Awards, was a Lambda Awards Finalist, and lives in terror of authorities showing up at her door to question her Internet searches.

Her natural habitats are airports, coffee shops, and on the backs of motorcycles.