Everyone’s got an opinion about vampires. Even my Nana. Presented with the news that her granddaughter is publishing a gay paranormal romance, her reaction was: ‘But why does it have to be vampires? I can’t stand them.’

Vampires have a polarizing effect on people, and no vampires are more polarizing than Stephanie Meyer’s Twilight series. She’s come in for a lot of criticism for her sparkling ‘vegetarian’ vampires (and for her weird misconceptions about vegetarians). A lot of the people who blast Meyer for ‘ruining vampires’ cite Bram Stoker’s Dracula as the epitome of vampire fiction, which makes me wonder … Have they actually read Dracula?

Don’t get me wrong. I love Dracula, I’ve read it 3 or 4 times and own 2 copies of it. But the first time I tried to read it, I gave up part way through. It was so tedious and slow. Using letters and diaries to tell the story created a distance that made it hard to connect with the characters. I wrote off vampires as not for me — until I heard about Carmilla by Joseph Sheridan Le Fanu. It’s a novella that predates Dracula and actually inspired Bram Stoker. The main character, Laura, gradually falls victim to her strangely languid guest, Carmilla. The events unfold slowly but inevitably, like a noose drawing tight. It is powerful and compelling, and that slowly dawning sense of horror, which the reader feels but the characters do not, is part of what makes the story so powerful. It also overtly links the vampire’s hunger for blood with sexual hunger, and that itself is interesting — one of the earliest vampires in English literature is lesbian! While Laura registers maidenly distaste for her advances and Carmilla dies, I still feel like there is a sympathy in Le Fanu’s portrayal of Carmilla, while Laura’s ambiguous response leaves room for interpretation while satisfying the morality police (Carmilla was published in serial form 1871-2, a period not known for embracing female sexuality in any form).

That ambiguity has led to Carmilla being reinterpreted as a youtube series set in a modern day University. Journalism major Laura’s attempts to investigate missing students is hindered by the arrival of her new room-mate, Carmilla. Without this adaptation, many people would never have known Carmilla  even existed. Hopefully, this new audience will lead to more interest in the vampire classics, and renewed interest in the genre — like it did to me. I loved Carmilla instantly, and, after reading it, gave Dracula a second shot. This time round, I could appreciate the slowly unfolding horror that the slower pace allowed. I was converted.

Unfortunately, with vampires now widespread and so widely reinterpreted, modern authors struggle to regain that same sense of horror. Many don’t even want to. Tina Folsom’s Scanguards vampire series starts with her vampire hero suffering erectile dysfunction, a thoroughly modern problem. Meyer’s vampires attend high school. This doesn’t always discount horror — I personally find the fact that Bella is drawn to Edward despite him constantly belittling her, stalking her, and creeping on her terrifying! Even Dracula could not make Mina like his attempted seduction of her — but I often feel like there’s something missing in modern vampire stories.

I approached Thorns and Fangs determined to try and capture some of that horror. Being a vampire had to have consequences that weren’t easily worked around. Sunlight is a real threat. Most don’t dissolve into neat little piles of dust once killed. Their long lifespans aren’t eternal life so much as a slow death, their prolonged existence leading to the gradual atrophy of everything that makes them human. They lose the ability to grow and change, instead being more and more set in their ways. Finally, they end up an exaggerated version of who they were in life, doomed to repeat their mistakes, seeing everything in shades of black and white, inflexible in their decisions — which makes the influence they spread over those around them even more terrifying.

Nate, initially attracted to the danger of the vampires, is quickly repulsed by their coldness and casual abuse of their powers. His slowly dawning understanding of the extent of the threat they pose is not enough to save his life. Unsure who to trust or what to do, Nate rejects the sensible choice, staking his life and those of others on his belief that there is still something human left in Ben. The story ends hopefully in a HFN, rather than on a HEA, which will not please many readers — then again, given how strongly people feel about their vampires, this is no surprise!

And, come to think of it, this may be a good thing. I’m not sure I want my Nana reading this story! 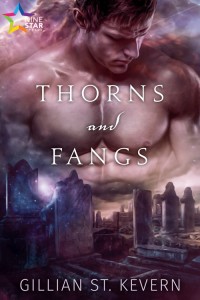 Nate is caught between two dangerously hot vampires who can compel people to do whatever they want and a ruthless necromancer who wants Nate for all the wrong reasons—and that’s only the start of his problems.

Escort Nate prides himself on two things: his ability to please his clients and his normality – living in the monster capital of the world, ordinary is rare. Hunter, a darkly charming vampire with more charisma than is good for him, decides Nate is just what he needs. Nate’s sympathetic nature and skill in the bedroom are put to the ultimate test. But Hunter wants Nate for someone else – his brother, Ben. Nate is immediately attracted by the control with which Ben holds his sensitive nature in force. Too afraid of becoming a monster to allow himself to feel, Ben struggles to resist Nate’s generosity of emotion. As a vindictive necromancer makes Ben his target of revenge, Nate discovers that making people feel good doesn’t compare to making Ben feel. As Nate’s normal world crumbles around him, and he desperately searches for a way to save Ben, Nate is unable to escape becoming the necromancer’s latest victim.

But Nate’s death is only the beginning. Coming back to life in the bathroom of Gunn, a Department Seven officer who hates the vampire family that Ben and Hunter belong to, Nate doesn’t know who to trust or even what he is. As the necromancer’s trap pulls tighter around himself and Ben, Nate is forced to let go of normal and embrace powers he doesn’t fully understand. In defiance of Ben’s vampire sire and hunted by Department Seven, Nate and Ben finally learn to trust and rely on each other. But when the necromancer succeeds in capturing Ben, Nate alone can come to his rescue.

Gillian St. Kevern is the author of Deep Magic, The Biggest Scoop, The Ugliest Sweater and Thorns and Fangs. Originally from New Zealand, Gillian currently lives in Japan and has visited over twenty different countries. Her writing is a celebration of the weird and wonderful people she encounters on her journeys.

As a chronic traveller, Gillian is more interested in journeys than endings, with characters that grow and change to achieve their happy ending. Her stories cross genres, time-periods and continents, taking readers along for an unforgettable ride. Both Deep Magic and The Biggest Scoop were nominated for Best LOR story in the 2015 M/M Romance Groups Member’s Choice awards. Deep Magic also received nominations in Best Cover, Best Main Character and Best Paranormal, while The Biggest Scoop was nominated for Best Coming of Age.