Last year my wife, BA Tortuga, and I went back to Texas from our relatively new home in New Mexico. Romantic Times was in Dallas and then we had a signing in Austin the next weekend. The very kind to host me here Andrew Grey was attending both events as well, so we asked him to hang out with us for the week in between. BA’s Daddy lives just north of Dallas, and we stayed with him a few days before going to tourist in Austin.

Oh, y’all, we had a ball. Andrew mined ranch information from Daddy for his westerns. We took him to a pee wee girl’s softball game where our niece played outfield. We had chicken fried steak and Tex Mex. We had long discussions about ice cream and personality traits. We showed off Austin, where BA and I loved for years.

The best part, though, was the night we had the cookout at Daddy’s house. We had a bunch of people over: BA’s sister, brother in law and their two girls, BA’s adopted brother Jeremy, Daddy’s then girlfriend. BA’s stepbrother and his wife. Us. Andrew. We were all sitting around, shooting the shit, eating hamburgers and country ribs, and suddenly David Allan Coe comes on the radio.

Now, if you don’t know the words to “You Never Even Call Me by My Name”, you’re probably not a country fan. That’s okay. I can’t say I understand, but I’m told that’s normal. Andrew didn’t know the words, and I could tell he was bemused when every single person at the table besides him began to bellow along with the song. Including Daddy, who sounds like a steamroller when he sings in his deep, raspy voice. We all knew every blessed line of the lyrics, and halfway through, Andrew began to smile and nod along.

By the third chorus, he knew the words, too. And he was singing loud about momma and prison and getting drunk…

And that’s how Andrew Grey learned the world’s most perfect country and western song. BA and I are honored that we got to teach it to him.

I have a few stories in the Buckle Up box set where the boys would probably sing along with old David Allan Coe. So here’s where you can find it! 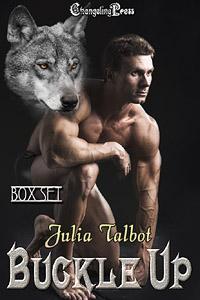 How many werewolves, magical shops, and cursed gamers fit into one box set? Quite a few when it’s Buckle Up! Magic, mayhem, and hot loving fill every story.

Buckle Up: Cody’s trying to find the original owner of an antique belt buckle. Pawn shop owner Kelvin’s happy to help this cowboy find anything he needs.

Crazy in Love: Keaton loves Starbucks and Wi-Fi. Dakota loves Keaton. But the city’s a dangerous place for a werewolf. A rescue is definitely in order.

Changes in Attitude: A warlock faces off against a werewolf and his lover. Can they all get what they want in the end?

Under the Moon: Jamie doesn’t do two things — other werewolves and gaming. Ty might just change his mind.

Dream Dice: Thayer has no idea what to expect when he buys new dice at a convention. He certainly doesn’t bargain for barbarian Erlich to enter the picture.

Publisher’s Note: Buckle Up (Box Set) contains the previously published novellas Buckle Up! Crazy in Love, Changes in Attitude, Under the Moon, and Dream Dice.