Have you ever wondered about someone’s sanity? I mean really, really wondered about it? I have. And I’m disappointed by it most of the time. The sanity of authors intrigues me, though. Oh, yes. For five people to write an anthology titled Butt Pirates In Space takes balls of steel…or ta-tas of titanium. And to follow that up with Butt Ninjas From Hell, Butt Babes In Boyland, Butt Riders On The Range, and, finally, Butt Villains On Vacation means we might just have to invent some new words to describe just how solid and hefty our gender organs have become.

We’re more than a title, though. We’re actually quite hilarious. I mean, what can you say about someone who writes a story titled The Attack of the Undead Enema? You can say they’re frickin’ nuts, that’s what. And T.C. Blue might even agree with you. Or The Flaming Skull B&B? Can you imagine how that mental health evaluation would go? Personally, it would serve Ally Blue right.

Then there’s Master Malevolence in the Tail of the Fluffy Monkey. Shit…that’s mine. Never mind that one. And, of course, Hero Land. Yes, Hero Land. It’s saying something that Kiernan Kelly may just be the sanest of us all. Or at least she’s faking it. Of course, this is the same woman who also wrote Squatting With Spurs On, Elf Confidence, Ninja Vanish, and B’Utopia. They sound unassuming, but I’m betting if you read them backwards, there’d be satanic passages somewhere in them.

Now, me? I prefer subtlety. I am the king of subtlety. I’ve always thought of myself as a filmmaker who never made any films, but I certainly wrote the stories that I would have loved to film…if I had the money and remotely any moviemaking skills whatsoever. Tell me Twink Ninja Tiger, Flaxen Buns Of Fury wouldn’t have made a terrific 42nd Street grindhouse title back in the day! Then there was Spacehunters: Master Elite and the Maternal Order of Loganites Beyond Uranus. Priceless! It’s A Wonderful Lube? Total holiday heart and throb-fest. And there was Chinchilla Chimichangas. You’ll never look at Taco Bell the same way again.

These are the kinds of things you’ve come to depend on and expect from us. We, the Butt-thology authors, are givers. We give of ourselves. So please join myself, Kiernan Kelly, T.C. Blue, and Ally Blue as we take you on a journey through Butt Villains On Vacation…because your mental health is just a sick game to us.

And now, a snippet from Master Malevolence in The Tail of the Fluffy Monkey

He and Chi Kit muttered it at the same time when both realized they’d be sharing the table. If Dylan had known Ngai had meant Chi Kit… Actually, Ngai was standing there with a huge grin. The attendant must have sensed the drama.

“No, no.” Dylan held his hand up, smiled, and cautioned his unwelcome post-festivity companion. “Don’t stand up. Oh, sorry. You already are.”

Dylan felt the surge of energy he needed to verbally bury someone he found annoying—which tended to be most people in life—and he saw Chi Kit’s face tighten, meaning he was probably doing the same. Instead of letting whatever would come out of his mouth next continue the assault, he breathed in deeply, exhaled, and forced himself to relax.

“Why don’t we try something new?” Dylan asked. “Let’s just act like two human beings tonight who know each other socially, but have never actually had the chance to sit down and talk one-on-one. We’ll both live longer.”

“Vietnamese life expectancy is better than Chinese,” Ngai spoke up and nodded towards Chi Kit.

“Go bring us your most expensive free drinks,” Chi Kit snapped at the attendant, “and a menu.”

“Food from the kitchen will cost you money,” Ngai reminded him.

“Right away then, sir.” The attendant turned to Dylan. “The Chinese are generally so”—he cleared his throat—“thrifty.” He also held up a keycard. “You dropped this on your way to the washroom, Mr. Dylan. Would you like me to return it to you now or…later?”

“I’ll hold onto it for now, thank you.” Dylan ignored the questioning look from Chi Kit and sat down instead.

Ngai went in search of drinks and menus, and Chi Kit slowly sat down at the opposite side of the table. 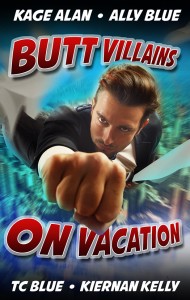 Butt Villains on Vacation: The Blurb

Heroes are boring. Seriously, how much effort does it take to be good? Fortunately, we don’t know! The Butt-Thology authors are back again with their latest action-packed, suspenseful, horrifying thriller…Butt Villains On Vacation. Okay, it might be a comedy.

Find out who Designation Enforcement are pursuing at The Flaming Skull B&B, if retired villain Drunkboy can find love without accidentally killing someone, what happens when Assassin Bandit’s travel agent books him into a resort with the good guys, and why villains and arch nemeses Master Malevolence and The Fluffy Bunny have morning sickness symptoms after hooking up with each other! 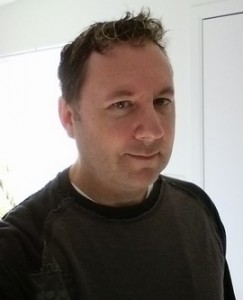 Kage Alan lives in a suburb of Detroit, MI with his husband and their fish & shrimp, who are all affectionately named and answer to “fish” or “shrimp”…except his husband. He lives in fear of his husband’s Hong Kong Grandmonster, and is the author of GLBT comedies A Funny Thing Happened on the Way to My Sexual Orientation, Andy Stevenson Vs. the Lord of the Loins, Gaylias: Operation Thunderspell, the non-comedic Falling Awake, and Butt-thology short stories Spacehunters: Master Elite and the Maternal Order of Loganites Beyond Uranus, Twink Ninja Tiger, Flaxen Buns Of Fury, It’s A Wonderful Lube, and Chinchilla Chimichangas.