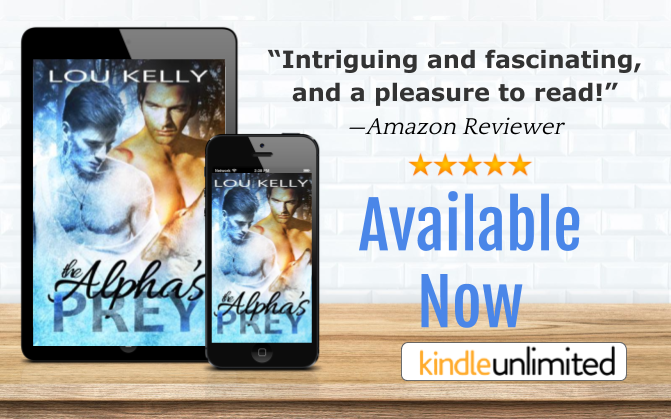 A Reader Interview with Lou Kelly

Q: Your books are all very different. Why is that?

A: I read very broadly – I love almost every genre – so I tend to write the same way I read. When I’m in the mood for a certain type of story I read all of them that I can find and then I run out of things to read, so I write a story in that genre.

Q: What are some other shifter stories that you enjoyed?

A: There are so many! Here are a few favorites. I loved Kim Dare’s Axel’s Pup, I liked Zoe Perdita’s Haven City series a lot, and I enjoyed Lia Cooper’s The Convergence Theory series. There are tons of others, but those are the ones that come to mind.

Q: What inspired you to write The Alpha’s Prey?

A: I happen to love shifter stories, but I’m not a big fan of the MPreg trope. (Absolutely no judgement if you love that trope! Everyone has themes they adore and themes that don’t hit their buttons. Love whatever you love!!) I was craving a new shifter story and I couldn’t find what I wanted to read since so many of the new ones have this theme, so I decided to write the exact book I was craving. That’s one of the fun things about being an author. I can create my dream book!

Q: Do you have a favorite character from your novels?

A: I often fall in love with my secondary characters. I don’t tend to plan them ahead as much, so they are fun surprises that develop as I write. In The Alpha’s Prey I loved writing Elton’s character, and in Unguarded it was so much fun writing Bart’s snarky humor. In The Edge of Control, I had a good time with the main character’s secretary – a little old, Dr. Who loving, soap opera addicted gay man who sometimes sighs with jealousy over the main characters.

Q: What are you working on next?

A: I’m attempting to write a fantasy trilogy. Eeek! That’s a lot of writing! I have one and a half books done, but I don’t want to release any of them until the entire series is written. (At least, in rough draft form.) So, once I’m done with the second book I plan to start getting reader feedback as I move into writing the final book. Wish me luck!

I’d also like to write companion books to my other novels. For The Edge of Control, I’d like to write Sawyer’s story. I have a companion novel underway for Unguarded, and for The Alpha’s Prey, I’d love to write Elton’s story next. That’s a long wish list, so I hope my readers will be patient. 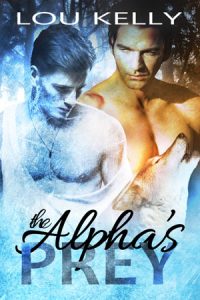 If there’s one thing Devon O’Leary hates, it’s wolves. Everyone thinks the wolfman he remembers as his abductor is a figment of his imagination, but Devon knows the truth and he has the scars to prove it. Wolf shifters are real; they have sharp claws, horrible fangs, and show no mercy to their victims. And one of their Alphas has claimed him as its prey.

Can two men overcome impossible odds to claim the love that was meant to be theirs? Or will Devon’s past cause him to reject the mate who would do anything to keep him safe?

Lou Kelly loves a great romance. Having honed her skills as an author through a decade of writing and publishing, she discovered m/m fiction and fell in love. What does she like best? The slow burn.

“No insta-love for me. I adore a well-developed full-length novel with characters who are believable and sympathetic. My favorite relationships are the kind where suppressed desire sizzles with sexual tension struggling for release. Give me a strong Alpha male who has to fight for his mate, or enemies who are shocked when hate turns into love, or a mysterious stranger who doesn’t want his secrets revealed … I crave books that keep me up past my bedtime.”

When she isn’t writing, Lou Kelly loves to travel. Sadly, most of her traveling these days happens between the pages of books, but top on her wish list is a trip to Greece. Followed by New Zealand, Ireland, Scotland, and Iceland. *sigh* Someday she hopes to explore them all. Until then, you can find her reading! – Lou Kelly is a member of RWA (Romance Writers of America), and a proud member of RRW (Rainbow Romance Writers).