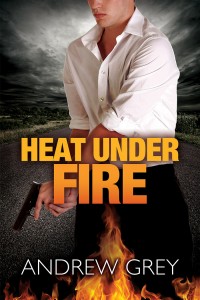 Though Rock and Justin share a steamy kiss, Justin keeps his distance, still tongue-tied. Then, when Justin is injured on the job, Rock takes him to the hospital, and some of the barriers start to crumble. But getting his enigmatic sweetheart to open up brings up more questions about Justin’s past.

About an hour later, a speeding car heading out of town caught Justin’s attention, and he flipped on his lights and pulled out to follow the car. He’d just gotten behind the driver and was about to radio in the call when a long screech, like nails on a blackboard, crawled up his spine. Justin looked up from the car in front of him and saw a school bus facing him on the freeway overpass. It took him a second to realize the bus was hanging over the edge of the overpass, and by then, he’d already disengaged from the speeder, who had sped up again and was heading up onto the freeway.

“Bus accident on I-81 South,” Justin radioed in. “Don’t know number of people involved. Need emergency services. Bus hanging over overpass, need South Hanover closed both ways. On my way to assist at the scene.” Traffic was already stopping on the surface streets. Justin needed to get up to the freeway, but the lane to the on-ramp was clogged, so he went up an off-ramp and turned so he went the wrong way down the freeway shoulder, siren and lights blaring so he could get to the bus.

It was teetering on the edge, and as soon as he stopped his car and got out, he could hear children on the bus, screaming. Cars on the highway were slowing, and Justin got the first cars to hold. He knew he was backing things up, but he needed to help those kids. “Stay there,” he told the drivers, and they held still, effectively closing the freeway. The bus screeched, and Justin saw it move slightly.

“It’s all right, kids,” Justin yelled, and the screaming subsided. “I want you all to slowly move to the back of the bus. Don’t move fast or suddenly, but slowly
walk to the back of the bus.” He saw the kids begin to move inside and heard sirens approaching from what seemed like all directions, but he kept his eyes on the kids. “That’s it. Keep walking slowly,” Justin encouraged as the back wheels of the bus settled back down onto the pavement. “Good, now all of you stay where you are. We’re going to get you out, but it will take a few minutes. No one move,” Justin said. “Is the driver with you?” he asked the kids through an open window.

“No,” a small kid about seven answered. “He’s in his seat with red stuff all over him.”

“That’s blood,” one of the other kids said, and a few of the kids began to cry.

“It’s okay, you’re going to be all right. We’re going to help you, and then we’ll get the driver out too. I promise,” Justin said, trying anything he could to calm them down. Other emergency vehicles arrived, and Justin continued working to keep the children calm. “Is anyone hurt besides the driver?” Justin asked.

“I hit my knee,” one little boy said.

“Timmy’s hiding under the seat,” one girl said.

“Make sure he’s okay,” Justin said, and he waited a few seconds as the girl’s ponytailed head disappeared.

“Very good. Please don’t move around, and we’ll get you all out as fast as we can,” Justin said, then turned around to the gathering group of vehicles.

“How many are hurt?” Rockland Sparks asked him, and for a brief second Justin’s composure failed him. Damn, why did he have to be the one who responded? Every time the EMT was around, Justin got completely tongue-tied. Rock, as everyone called him, was just that: built solid, with arms that stretched his shirt sleeves. Justin swallowed and opened his mouth to respond, hoping like hell some sort of sound came out.