Last October I was at a conference with a friend, Hope.  I had finished a novel and was looking for an idea.  At the conference I attended a seminar on storytelling and the leader quoted Henningway’s answer to the challenge to tell a story in as few words as possible.  His response was “For sale, baby shoes, never worn.”  I was fascinated with the idea and after talking it over with Hope the entire ride home, I began this story. 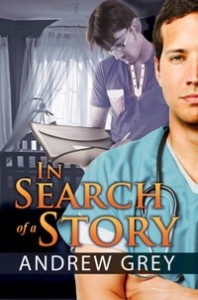 He’s searching for a story but finds so much more.

Brad Torrence is next on the chopping block at the newspaper where he works. Hungry for any source he can find, he runs across an ad in the classifieds: For Sale: Nursery Items, Never Used. It’s the lead he’s been looking for. Thinking a piece about the loss of a child will give him the edge he needs to keep his job, Brad follows up. He doesn’t expect a single man to answer.

Rather than being offended, Cory Wolfe finds sharing the story of his grief and pain liberating. He’s even surprised by the spark that strikes, and one story leads to another.

Brad digs into his stories and Cory’s life, eager to know everything about the man who’s caught his attention. But when a lead points him to the hospital where Cory works, he unearths a mystery that might have been safer left buried. Brad’s search for a story could prove deadly….

The man on his doorstep was as young as he’d sounded on the phone, with deer-in-the-headlights eyes and a nervous smile. “Hello, I’m Brad Torrence from the Crier,” he said and extended his hand. The kid looked a bit like an excited puppy.

“Cory Wolfe,” he said, and they shook hands. Cory stepped back so Brad could enter and then closed the door. He motioned toward the living room. He waited for Brad to take a seat and then he sat in his favorite leather chair.

“This is a great room,” Brad said with a touch of awe in his voice. Then he sat and waited. Cory got the impression he was waiting for something.

“You wanted to ask me some questions? I’m a little unsure why you’d want to interview me,” Cory said. “But I’ll try to help.”

“I probably should have been more clear: I was hoping to interview both you and your wife.”

Cory smiled. “Nope. It’s just me. No wife.” That simple statement sent a stab through his stomach.

“Wait, let’s back up. There’s never been a wife. I think we have a misunderstanding of some kind. I’m not married and never have been,” Cory clarified. Brad became jittery, and for a second Cory thought he might hyperventilate.

“Yes. Like I said, I never had a wife, but I was getting ready to have a baby,” Cory said. “I had a partner a few years ago, but he wasn’t interested in children, though I was. That and, well, other things, doomed the relationship….”

“Aren’t you supposed to ask me questions?” Cory asked.

“I can,” Brad said. “Your ad caught my attention, and I thought there was a story behind it. I’ll admit that I was expecting to do a story about mothers recovering from grief after the loss of a child. My mother lost three babies after me.”

Cory nodded thoughtfully and then stood up. “Come on,” he said, and Brad stood up. Cory led him up the stairs, and at the small landing, he opened the door and turned on the light. He hated entering this room now. Brad stepped inside, but Cory remained in the hallway, physically unable to enter. “This was to be Adam’s room. I picked out the furniture, painted the walls. I spent days picking out just the right color blue. Then I asked a friend to paint the teddy bears on the walls, and we even added stars to the ceiling.” Cory didn’t look up. Unable to take any more, Cory stepped away from the door and waited for Brad to come out of the room. Then Cory turned off the bedroom light and closed the door. Without saying anything more, Cory led the way down the stairs and back to the living room, where he once again sat in his chair.

“Mothers aren’t the only ones to feel grief,” Cory said flatly.

Cory wasn’t sure why he opened up, but he did. “About a year ago, I found out my best friend, Eileen, was pregnant. She wasn’t married and was barely able to take care of herself. Eileen was wonderful, but there wasn’t a maternal bone in her body. She’d decided that she wanted to put the baby up for adoption, and I asked if I could adopt the child.” Cory’s voice broke, and he yanked a tissue from the box on the lower shelf of the end table. He never thought he’d keep tissues in various rooms of his house, but for months now he’d needed them. “Eileen was thrilled. She would still get to be a part of her baby’s life, and that was all she wanted.”

“You said his name was Adam?” Brad prompted.

“After we found out she was having a boy, I came up with the name, and Eileen liked it, so we started referring to him as Adam. I bought the nursery things and fixed up the room upstairs. Everything was ready.” Cory paused and blew out his breath. He needed to get himself under control. What he wasn’t prepared for was Brad to reach over and touch his hand. Cory hadn’t been touched in quite a while, and he liked it. The gesture was probably a breach of journalistic integrity and objectivity or something like that, but it was what he desperately needed.

“Please, take your time,” Brad told him. “I’ll listen.” Cory thought he might have seen tears in Brad’s eyes, but it was hard to tell through his own.

“Eileen was about eight months pregnant, and she was at home. I hadn’t heard from her that day, so I stopped by after work. I found her on her kitchen floor, where she’d fallen.” Cory figured he might as well finish the story and get it over with. “The autopsy showed that she had a blood vessel burst in her brain. It was probably a defect she’d had since birth, and it burst. They said she died pretty quickly.”

Brad had taken notes throughout his story, and Cory waited for him to finish. “Did you get any help? With the grief, I mean.”

Cory shrugged. “Some. I actually found a group for people who lost children in Harrisburg—eleven women and me. The thing was, at the time I didn’t consider my grief as bad as theirs. I wasn’t the one who’d carried the child, but….”

“You still lost a child just the same,” Brad said.

Cory nodded. He does understand.