At midnight Eastern time tonight, the next story in the farm series, Love Means… Patience releases.  In honor of that I thought I would post an sneak peek excerpt. I really hope you enjoy it!  This story is intense and emotional.  I loved writing it and I hope you enjoy reading it. 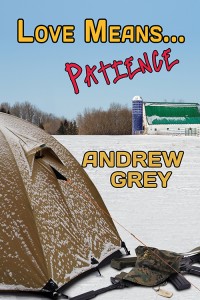 Years after his discharge from the Marines under “Don’t Ask, Don’t Tell,” Cody Culver lives in a PTSD-induced world all his own. On a mission, under misconceptions that Geoff and Eli are the enemy, Cody breaks into their farmhouse but is quickly brought back to his senses by a frying pan to the head. After receiving much needed help in the hospital, Cody has nowhere to go. Luckily, kindhearted Eli knows just where to turn.

When Eli asks former Marine Brick Hunter to help, Brick isn’t sure he wants to get involved. But Brick has worked through his own PTSD, and like it or not, he owes Eli a favor. With Cody struggling to rejoin the real world and Brick agreeing to take him in, they discover they have more in common than either of them thought possible.

Though Cody tries to stay in the here and now, he sometimes flashes to unexplainable traumatic events—events that don’t fit his usual war zone delusions. As the “delusions” grow more frequent, it becomes apparent they might not be delusions at all. Cody may have actually witnessed a murder.

Cody woke with another start and forced himself to remain still and quiet. He gripped his gun tightly and listened. His dreams made his nights so much worse than his days. He only hoped he hadn’t done anything in his sleep to give away his position. He heard nothing but the same cracking in the trees. He peered out of the tent and saw the first gray light of dawn on the horizon. He knew he had to be gone and under deep cover before it got too bright. Cody shook out and rolled his bedding, then attached it to his pack the way he’d done a thousand times before. He then got the rest of his gear together and pulled on his boots before leaving the tent.

In a few practiced moves, he had the tent down, packed away, and the poles folded and stowed. He’d eat once he was deeper under cover. Lifting the pack to his back, he surveyed the terrain, instantly marking every location a sniper could take refuge, and then began making for the deeper woods.

Cody was extra careful not to leave a trail someone could follow. He avoided large patches of snow where possible. A snowmobile had been through the woods recently, and he used the chewed-up snow from the belt to disguise the way he covered his own footprints. He didn’t always have luck, but since it was still snowing some, Cody wiped out his prints as best he could for a while and then gave up and began jogging. He stopped at the far side of a shallow, frozen bog and crouched behind a tree. He could have sworn he heard someone following him. The sound had been just on the edge of his hearing, so he couldn’t be sure. He set his pack on the ground and got his gun ready in case they were hostiles.

Nothing happened for a long time, then Cody was again sure he heard footsteps. He turned to the side and stopped, staring into the huge brown eyes of a magnificent buck. He was eight points and as majestic a creature as Cody had ever seen. If he’d been back home and not stuck in this godforsaken wilderness of a war zone, he would have taken a shot. As much as he needed the food, he couldn’t take the chance of giving away his position. His men, who he considered family, were counting on him to get through and bring back help. Cody did nothing. A breeze came up, and the buck caught his scent and took off into the trees. Cody watched him go and smiled.

There hadn’t been a lot of peace in Cody’s life lately. He’d been running, hiding, and fighting the enemy for what seemed like a lifetime. The deer brought a momentary peace to his soul he hadn’t expected. Once it was gone and Cody heard no more footsteps, he scanned the landscape in every direction. He had to continue east. That was the way his commander had told him to go. But first he had to have something to eat. He’d exhausted his supplies, and he couldn’t remember the last time he’d eaten. His body had been running on reserves for a long time. Cody checked once again that he was alone and then began foraging for kindling. He built a tiny fire and used his kit to melt some clean snow. His first priority was hydration, and then he needed food. But where was he going to find it? Once the snow melted and he’d had plenty to drink, he doused the fire and packed up his things. He had to move on. That was his only chance. Maybe he could find a place and steal some food.

He’d stolen before; Cody had no qualms about it. This was war, and he needed to stay alive. He never took much, and he was always careful to leave the houses he entered with food of their own, but he needed to eat and sometimes that was the only way. Cody began to move. His belly contained only water, but it was satisfied for now and he had to make the most of it.

He must have been walking for half an hour when he heard laughter. He paused and stepped toward the edge of the line of trees that formed his cover. A farm filled the clearing. He was far enough away and dressed to blend in, so Cody was fairly sure no one would notice he was there. Cody watched as a kid frolicked in the snow, having a snowball fight with a man who eventually picked up the boy and twirled him around until they both tumbled into a snowbank, sending up a shower of white fluff. Cody didn’t see anyone else around, so he snuck closer and hid around the edge of the barn. The man and boy continued playing.

Cody hid his pack and made his way to the door of the farmhouse, checking for movement in case someone else was in the house. He pulled it open and snuck inside. The house was larger than he’d expected, but the kitchen was warm and smelled so fragrant he almost forgot why he was there. Memories flooded back, and Cody held his head, unable to process them all. This was not supposed to happen; not here, not now. He was at war, and this was a mission. He needed to take what he needed and get the hell out of there. Cody set his gun down but kept it close at hand. He started opening cupboards and found a box of snack cakes. He tore into them and ate each in a single bite. The sugar hit his system almost immediately, and he felt a surge of energy. He continued looking and grabbed the first cans he saw. They would last him a few days, and he could deal with whatever was inside. He filled his pockets with the rest of the snack cakes and then stuffed the rest of the cans into his pack and headed for the door. As he passed the sink, he looked out the window above it and saw the man and kid still playing in the yard.

“What in hell do you think you’re doing?” someone said behind him.

Cody twisted and was reaching for his gun when his head exploded with stars and his knees buckled.

“How in the hell did you get into my kitchen?”

Cody fell, clutching his gun and trying desperately to see his attacker so he could take one clean shot. Darkness overtook him instead, and the last thing he remembered was lying on a warm floor.