Next month, April 11, is the release of a new story in a new series.  Planting His Dream is a clash of worlds story.  Foster inherits the family dairy farm and seems to have everything.  At least that’s how it looks to Javi, a migrant worker whose family comes to help pick asparagus.  He has nothing and his life is so hard, he doesn’t even dream any longer.  Can Foster help change that?
When writing this story I was struck by how bleak and hopeless Javi’s world had become to him.  He had no hope of escaping the life his mother and father had.  One of work and little else.  This came to light for me as I wrote a scene where Foster and Javi were on the top of a hill, looking down at the farm.  Foster saw the green and life, Javi saw only the van where his entire family lived.  Foster talked about what he’d dreamed and Javi told him he had none.  So in a way Foster sets out to plant some for Javi. 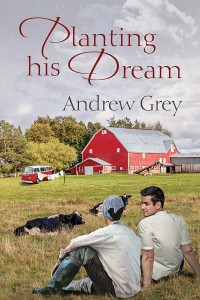