Ronnie has to be one of my most unique characters.  He’s brash, bold, cocky, caring,  sometimes tender, but generous with his things and to Clay, his time.  But there is something else that’s important to remember, Ronnie also has a mental illness.  He’s obsessive compulsive and there are things that go along with that.  He fixates on things, has trouble letting things go and can be a self centered.  But in the story, its Clay who cuts through a lot of that for him, which is a big deal.  For Ronnie, the things he fixates on play in his head over and over again.  He isn’t able to make them stop.  So things like losing his father, even after a period of time, are as fresh to him as the day they happened.

Another big deal for Ronnie are his cars.  He loves the things.  They’re flashy and showy and he uses them to show his success and wealth.  They’re also part of the validation that Ronnie needs that he’s a success and good at what he does.  Now I was lucky enough to have the chance to get up close and personal with one of Ronnie’s cars and I thought you’d all enjoy a picture.   This is me with one of Ronnie’s Lamborghinis.  I really hope you enjoy Eyes Only For Me and when you read it, cut Ronnie a little slack.  (Just a little.  After all he can be an annoying pain in the ass.) 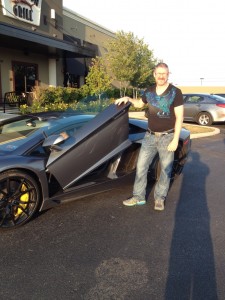 Purchase a copy of Eyes Only For Me