Taken is being released tonight at midnight.  This is the follow up to Stranded, but the stories are independent and can be read separately.  I got the idea for this story as I was at a friend’s wedding.  I was sitting in the church at a gorgeous ceremony and my mind began wondering what would happen if the groom didn’t show up.  Then I began to ponder what if the groom didn’t show up because he couldn’t?  What if he’d been kidnapped or hurt and couldn’t show up and the partner thought they’d been stood up?  After that my mind kept churning.  Of course I said nothing at the wedding, but a month or so later I got the chance to explore what I’d been wondering and the result was Taken. 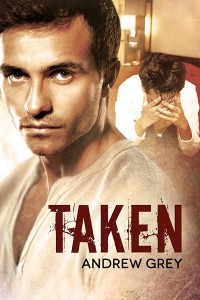 Malik was cold. He reached to pull covers over him and then scooted over to be closer to Roman’s radiator-like heat. When the cold didn’t abate, he tried again. Somewhere in his clouded mind, he knew this wasn’t right. He was in bed with Roman at their place, and it should be warm. He was always warm with Roman, inside and out. Malik tried a third time and then gave up. He curled into a ball, and for a few seconds he was warmer and sank back into oblivion.

He didn’t stay there for very long. The cold seeped through him once again, and this time when Malik moved, he realized there was no bed at all. He was lying on something hard and cold. He reached out and patted the area around him, the source of his discomfort, which shocked him.

“Roman, you pushed me out of bed,” Malik whined, and then he stood up, eyes still closed, and tried to get back in bed. But there was no bed to get back into, and he stumbled and caught himself before forcing his still-heavy eyelids to open.

Malik looked around in complete confusion. He had no idea where he was, his head ached something awful, and he could barely stand up. His mind swam and swirled. Malik closed his eyes once again and ended up sitting on the floor because it was the only position that didn’t make him want to throw up. He breathed in deeply and then released the air from his lungs, trying to figure out what in hell had happened. Slowly, very slowly, his head cleared, and he was able to open his eyes without dizziness. He could see very little. The only light in the room came from one of those glowing nightlights. Nothing else. Malik was in a bare room with what looked like concrete walls. No furniture. The only things that broke up the walls were two doors. Malik stood up and took a few tentative steps. He opened the first door. It led to a bathroom with a sink mounted to the wall, and a toilet, nothing else. Not even a towel or anything to wipe his hands with. He turned and closed the door before walking to the other one. The knob didn’t turn, and he tried pulling, but the steel door didn’t budge.

What the hell was going on? Why was he in this room? “Hey, let me out!” he cried, pounding a few times on the metal door. No answer. Nothing. He pounded again and then listened…. He could hear nothing at all from the outside. “What’s going on?” he asked out loud, needing to hear something. He wrapped his arms around himself for comfort and warmth before slowly making a circuit of the entire room.

In one corner, he found two blankets folded and left in a pile. Malik opened one of them and wrapped it around his shoulders. He reached up and touched the low ceiling. It seemed to be made of those acoustical tiles they used in the seventies. There was a light in the center, and Malik looked for a switch on the walls. He found one near the steel door, but nothing happened when he flicked it on.

Malik took a few steps to the other blanket and carried it to the center of the room. He placed the blanket on the floor and sat on it before looking around again. His eyes had adjusted to the dark, but there was nothing to see. He was in a cold concrete room with a bathroom and two blankets. He patted the pockets of the jacket he was wearing, hoping to find his cell phone, but they were empty. He slipped his hand into each pocket of the soft tuxedo jacket, only to come up empty.

He froze, then stood up, stepped closer to the only source of light, and looked at his clothes. Tuxedo. His brain must have been scrambled. He was wearing a tuxedo.

A chill went up Malik’s spine, and he remembered. He’d gotten dressed to go to a wedding—his wedding. His mouth dropped open. Today he was marrying Roman. A smile spread across his face but quickly faded. He tried to check his watch to see what time it was, but it was gone too. Malik began to shiver. Was he too late? Had he already missed it?