Sometimes I get ideas for stories and I have no idea where they came from, Saving Faithless Creek is one of those stories.  I did get an interesting idea and wanted to see if I could make it work.  As a gay kid, I was bullied, even though at the time, I didn’t understand about being a gay kid and I wasn’t out of the closet in high school.  But I didn’t fit in and of course I had some kids who decided that since I was smaller than them, I was someone to be picked on.  So I started to wonder about the bully and how they grow up.  Some bullies never change and act that way their whole lives.  But what if the bully in the story had a hard life?  What if after high school his life changed and in the end, he was no longer the same person?  What if the bully and the bullied met years later?  I’m smiling here just thinking about it.

I wish I could say I used one of my bullies in high school as Royal, but none of the guys I knew then looked anything like him or had the internal compass Royal has to see who he is and was and make a change.  At least I don’t think so, who knows, but the Royal that Blair meets in Saving Faithless Creek after all these years isn’t the kid he went to high school with.  He’s very different.  This Royal has seen life, known loss and pain, and has come out the other end a different person.  And after that I wondered if it were possible for the once bullied to fall in love with his former bully.

To my surprise the story really came together.  And I have to give a shout out to Mary Calmes, Amy Lane, and my Plotbusters Geri and Heidi for all their help in listening to me talk about this story as I worked through the emotional quagmire. 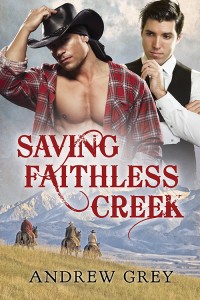 One Response to “Saving Faithless Creek – The Idea!!!”