In honor of the sale at Dreamspinner which ends July 31 at midnight, I wanted to give all my fans an advance sneak peek into The Gift which is releasing on August 10.  I got to have a lot of fun writing this story.  I have to confess that I’d been watching quite a few romantic movies when I was writing this story.  🙂  I really hope you like it. 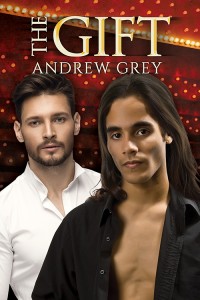 “I’m sorry to bother you,” Betsy said. “When I called to ask Paolo to cancel the class, he said you were here, and the students always love your classes.”

“It’s no problem,” Ember said, still feeling heat on his back. “What’s the deal with the guy behind me?” he whispered to her.

She rolled her eyes. “Sometimes I think you’re almost blind. His name’s Alejandro. He’s a relatively new member.” She turned away. Finally Ember felt the heat from behind him dissipate. “He’s been watching you every time he sees you. But I think today is the first time he’s ever taken a class with you.” Betsy was clearly enjoying this. She was a very competent manager, but people tended to dismiss her because she also had a figure to die for and the face of a model along with incredible naturally blonde hair.

Betsy scoffed. “Because you’re so used to guys looking at you that you never pay attention.” She stepped back. “Half the men and women in here have eyes for you, but you don’t see it. I think it’s the whole man-whore thing you have going on.” Ember growled under his breath. “Fine, ‘escort’ thing.” She waved her hand dismissively. “You don’t even see that sort of interest any longer, and I feel sorry for you.”

“Yeah, you. I know you always do the best for your clients, and if I was a guy and I needed an escort, I’d definitely look you up, because you have this whole nurturing thing going on too. I’m sure you talk to them and try to make them feel better about themselves. That’s what you do here, anyway. But you don’t have anyone to do that for you, and you’re missing out.”

“Yeah, well, this ‘man-whore’ job I have comes with a price.” He’d seen that firsthand with Hunter and Grant. Hunter had been at the top of the escort game and ended up leaving the business for Grant. “To tell you the truth, I don’t give it much thought. I like my job and I get more intimacy than anyone I know. I’m good to my clients, and I’ve told you before, it isn’t about sex for most people. A lot of the time it’s talking and companionship.”

Betsy rolled her eyes again. “Listen, honey, if you swung my way and I got you alone in a room with all these muscles and that sexy hair thing you’ve got going on, I’d have you flat on your back and I’d ride that bronco until he screamed for mercy.”

“You’re surprised by that?” Betsy grinned. “Let me tell you, if I got my hands on a guy who looked like you, I’d certainly not let him go, and if I was paying for his time, I’d make dang sure I got the most from it.” She chuckled at his reaction. “But that isn’t going to get you someone who will be there for you no matter what, and that’s what I’m looking for now. I’ve done the anonymous bump and grind thing and I’m getting too old for that.” She stepped closer. “Besides, I’m getting lonely. I want someone to come home to and travel with and do things.”

“That’s great,” Ember said. It was for her, but he knew Betsy, and when she made a decision about her life, it meant she thought it was the right thing for everyone. Ember wasn’t so sure about that. “So what do you know about Alejandro?” He hoped the guy wasn’t a hanger-on or a serial killer. He also wanted to change the subject.

“I don’t know too much. He has this great Southern European accent that’s rather dreamy and would be at home in anyone’s bedroom. I’d go out with him if I had anything he was interested in. He seems like a stand-up guy. Nice smile, laughs a lot. He comes in three times a week. If you want to know more, you’re going to have to talk to him yourself.” Betsy flashed him another smile and then hurried off to take care of business.