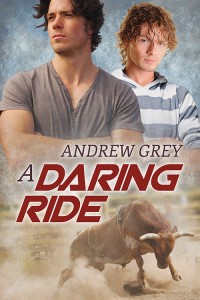 Simon “Frizz” Frizzell sneaks away to the rodeo on weekends, and it’s not until after he wins a buckle that he tells his parents about his bull-riding. He knows they won’t approve of his choice of sport, but his parents own a Christian bookstore, and he couldn’t possibly tell them the whole truth: he’s gay. And so are some of his rodeo friends, like Dante and Ryan, and Jacky—a young man he wishes could have been more than a one-night stand. When Simon sets his sights on his dreams, he finds work with Dante and Ryan, and bumps into Jacky on the job.

Jacky Douglas is a rodeo fanatic, plain and simple. He loves the ride, and he loves the cowboys. He fell hard for Frizz when they met, and theirs was a one-night stand made in heaven. When they meet again, Jacky thinks it’s a stroke of luck. Frizz takes some convincing, but once he’s on board, they begin a relationship. The fledgling romance faces a challenge when news of it travels all the way to the one place Frizz doesn’t want it to go: his parents’ bookstore.

“Hey, kid, give ’em one hell of a show. That’s all you need to do,” said the old man standing near the bull chute as Simon Frizzell walked past to take his ride on Geronimo’s Revenge, the bull he’d drawn. He kept the Frizzell part quiet and went by the nickname “Frizz,” ostensibly because of his curly red hair. No one on the rodeo circuit knew his last name and everything that went along with it, and that was exactly how he wanted to keep it.

“I’ll do my best,” Simon said as he checked his equipment over for the last time and got into position. Bull rope, protective vest? Check. Hat, chaps? Check. Sanity? Well, by most people’s standards that was debatable, but from the rush of blood through his body and the zing, bordering on a high, that sang through his brain, he could put a check behind that as well.

The handlers signaled that they were ready, and Simon climbed on the rail. “Ladies and gentlemen, Simon the Frizz will be riding Geronimo’s Revenge, one of the meanest bulls on this part of the circuit. So put your hands together and let him hear it.” Simon the Frizz. That was a new one, but he liked it. He heard the people in the stands around the outdoor ring whoop and holler. It was doubtful that any of them had ever heard of him before—this was only his sixth rodeo. He’d wanted to ride rodeo since he was big enough to sneak away from his folks’ place to the ranch next door and pull himself up the fence so he could see the men practice busting broncs and take turns riding the bulls. This was what he’d always dreamed of doing.

Simon waved from the top of the fence, smiling wide and mugging for the crowd. Then he climbed over the fence and settled on the bundle of caged power that was Geronimo’s Revenge. He could smell sweat and pure testosterone coming off the beast. He waved to the crowd one more time and then took hold of the rope, making sure his legs were in the proper position before giving the signal.

The bull leaped out of the gate, landed, and then bucked straight up, turning in midair, landing and then turning the other way. By sheer luck and the grace of God, Simon managed to stay on. He jumped again and began to whirl. Simon moved with him, trying his best to anticipate the animal’s next move. His training said one thing, but that voice in his head told him something different. He went with the voice, and dad-gum, he was right. That fucking bull switched directions, but Simon was ready. It wasn’t pretty, and he forgot to use his hand the way the professionals did to make it look easy, but he was still on. Simon yelled at the top of his lungs, shouting the joy of lasting this long to the universe. The bull switched gears again, and Simon felt his balance begin to go. Just one more second. He held on, using his legs to last just a split-second more.

The bell sounded, and Geronimo’s Revenge seemed to have had enough. He jumped straight up once again, then landed on his front hooves. His rear hooves touched the ground and then bounced right back up. Like being flung from a slingshot, Simon flew off his back. Thankfully, he had the presence of mind to let go of the rope, and instantly he was in the air, sailing over the bull. Simon landed and rolled, hoping like hell the bull didn’t come after him. He’d only just come to a stop before he scrambled to his feet and raced toward the fence. He didn’t even look back as he climbed the fence. Bang! The fence shook, and Simon leaped over and onto the ground. He found his feet, barely, and one of the spectators grabbed his arm to keep him from sprawling into the stands.

“Whooee, what a ride!” the announcer called. “The kid’s okay. Let’s give him a hand for making the count!” The crowd cheered, and Simon went to take off his hat, but realized it was gone. Someone shoved it into his hand, and Simon turned in time to see one of the rodeo clowns nod to him. Simon waved the hat in return and then climbed on the fence, holding his hat high to the Saturday rodeo crowd while he waited for the score. “Well, folks, it wasn’t pretty,” the announcer said, and a chuckle went up from the ring of bleachers that lined the ring. “But Frizz stayed on Geronimo’s Revenge, and that’s a feat, I must say. The score for that ride is 87.3. He’s in the money, folks.” The crowd cheered once again.

Simon knew that because of his ranking, most of the score had been for the bull, but he’d take it. Like the announcer had said, it might not have been pretty, but he’d done it. Simon waved one last time and then climbed down from the fence and headed around the arena walkway toward the space between sets of bleachers.

“Frizz, you did it,” Gardner cried as soon as Simon made his way behind the crowd. Simon and the bronc rider had formed a deep friendship over the years. They’d grown up relatively close together outside Oklahoma City and had discovered a mutual love of rodeo.  Simon and Billy Bob—which was why he went by Gardner—shared rooms at rodeos to save expenses.  Gardner’s dad was like a second father to him, and they were the only two people who knew Simon’s little secret.  “Can’t believe you stayed on that sumbitch!” Gardner teased.