Love Comes Home started when sports reporters were talking about baseball.  I rarely listen to baseball, but I was on an extended trip and had NPR on the car’s satellite radio.  Of course NPR has a sports reporter who was doing a color story around baseball.  But being NPR, he chose something different.  That was the day I heard about Beepball for the first time.  They were at a game and mostly it sounded like any other baseball game, coaches giving instruction, parents yelling encouragement.  Then it got silent and all that came through was a moving beeping sound.  As soon as a pitch was about to be thrown, everyone quieted.  The ball beeped, the bat cracked, and bases buzzed.  People yelled they were off.

I wished I could be there to see it.  The reporter explained that some of the players were sighted and wore blindfolds to round out the team.  They also explained that there were sighted volunteers to help ensure player safety.  There were other changes as well including the number of bases, the way a runner is gotten out, and so on.  I found it fascinating.  Dominic and I looked at each other and I knew what he was telling me.  Here was a story idea.  And it was a good one.  I had to finish One Good Deed before I could start Love Comes Home, but by then Greg, Tom, and Davey were ready to tell me their story.

Nothing warms my heart like story, real of fiction, that demonstrates that there is nothing in life that cannot be overcome if someone puts in a little effort, time and imagination.  And that includes allowing the blind to play baseball.  There has only been one caught hit in beepball and just a few home runs.  I really hope my story hits one for you. 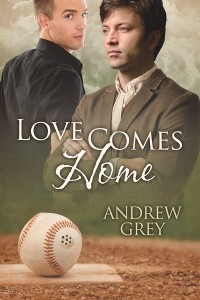 One Response to “The Story Behind Love Comes Home”