There are times as a writer when you are hit by an idea that really knocks your socks off. When that happens, you get down on your knees and thank your lucky stars.  Stranded was that kind of story for me.    There are many plot points that have been used again and again.  I’m not saying there is anything wrong with them, they work.  But coming up with something different is difficult.  So when I saw a car sitting in the desert when I was in Albuquerque for a convention, I had one of those excited moments because I thought of handcuffing my hero in the car.  The heat, the tension, the stress… all of it hit me at once.  All the will to survive that would be sapped by the heat and I was excited.

I had already been thinking of a life imitating art type of idea, so the story for stranded started to take shape.  From there I developed my characters and then wrote the story.  I really hope you’ll give it a try.  And I hope you love it. 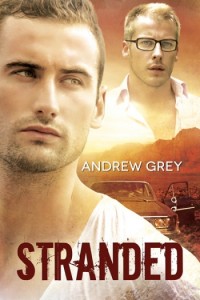 Kendall Monroe is handcuffed to a car in the desert.

Is this life imitating art or art imitating life? The only thing he’s sure of is that the situation he finds himself in is a copy of a scene he filmed earlier, only this time, there is no director yelling “cut” and no crew to rescue him. Terrified for his life, Kendall takes comfort remembering happier times with his long-time lover, Johnny. He hasn’t seen Johnny in weeks since Johnny stayed behind to finish his latest best-selling novel.

As he attempts to survive scorching-hot days and freezing nights, Kendall tries to figure out who did this to him. Could it be Johnny, or the research assistant he suspects Johnny is having an affair with? Both options fill him with bitterness. Or is it a more likely suspect? Kendall has a stalker who sends him flowers and always seems to know where he is. But what does this stranger have to gain by leaving Kendall stranded in the middle of nowhere?

The door buzzer sounded. Kendall hated to leave, but he knew it was probably the messenger, so he turned and left the apartment, then took the flight of stairs to the main level. Sure enough, he saw a bicycle messenger waiting outside the door. He took the package and gave the kid a tip before making sure the door closed tightly and then going back to the apartment. Johnny was back at work, immersed in his story, and Kendall knew he needed to let him work.

He opened the envelope and pulled out the screenplay for Stranded, then threw away the wrapping. Then he sat in one of the chairs, the clacking of computer keys his accompaniment as he began to read.

He hardly moved for almost two hours as he read the script from cover to cover. By the time he was done, he had an excellent idea about the story.

“So, what do you think?” Johnny asked. The lid of his computer was closed and Johnny handed him a glass of iced tea. “I figured you could use something to drink.”

“Yeah, I think so,” Kendall said as he took the glass and drank down half of it. “This is….” Kendall swallowed. “I think this could be very powerful, but I don’t know if I can do it.” He opened the script and found the pages he wanted. “The main character gets stranded in a car. You know I’m claustrophobic, and they want to handcuff me in a car for hours on end.” Kendall could already feel the sweat threatening to break out all over at the thought.

Johnny read for a few minutes. “Hey, think about it. The car will only be parts of a car, because they have to film it. So while it’ll look like you’re stuck in a car, you won’t really be.” Johnny handed him back the script. “I think you’re trying to psych yourself out so you won’t have to do this.” Johnny sat next to him. “Here in New York, you’re a big fish. Everyone knows who you are, and yes, you can get almost any part you want. But this would be like starting new. You should be excited, not afraid.”

“Are you trying to get rid of me?” Kendall asked.

“No. I’m only returning the favor. You encouraged me with my first book, and now it’s time for me to do the same for you. You need to spread your wings.” Johnny lightly patted his leg and then leaned in and kissed him softly. Kendall hoped for something a little warmer, and attempted to pull Johnny closer, but he pulled away. “I have an appointment with one of the librarians at Columbia.” Johnny glanced at his watch. “I’ll only be gone for a couple of hours, and when I get back, we can have dinner together. I promise.”

“On a Sunday afternoon?” Kendall asked, but Johnny was already up and going. He grabbed a light jacket and hurried out of the apartment. Kendall didn’t know what the hell to do, so he went back to the bedroom and opened the book he’d started earlier. But he couldn’t concentrate.

A cell phone ringtone sounded, and he snapped the book closed and located Johnny’s phone. He answered it to stop its incessant ringing. “Hello,” Kendall said tentatively.

The line was quiet for a few seconds. “No, that’s okay. I’ll see him later.” The call disconnected, and Kendall stared at the blinking number. He set the phone on the coffee table and was about to go back to his reading, but instead, he picked up the phone again and brought up the call history. While there was no name in contacts, Johnny had been getting calls from the same number every few days for at least the past month or so. Kendall closed the phone and placed it back where he’d found it.

He needed something to do, so he decided to start dinner. He chopped vegetables and got them ready to cook. He seasoned the beef he’d bought earlier and let that sit to build up some flavor, and peeled potatoes before getting them ready to boil. The entire time, Kendall found himself staring every few seconds at Johnny’s phone, and finally he allowed himself to voice what he was fearing: Is Johnny having an affair? At least that would explain the complete lack of interest. God, he didn’t want to think so, and his heart ached. He still loved Johnny, and he needed him. Johnny was his anchor, his rock—he always had been.

They had been growing apart; he could see that. But maybe it was just a product of their busy lives and months or years on very different schedules.

His phone rang, and Kendall hoped it was Johnny. No such luck. “Hey, Sal,” Kendall said when he answered.

“Did you get the script?”

“Good. I wanted to make sure. They need an answer tomorrow,” Sal told him, and Kendall nodded.

“I know, and you’ll have it. I need to think things over. I know how you feel, and I’m giving this a lot of thought,” Kendall said as he wandered over to the window, peering out at the relatively quiet street below. “I have to be honest that I’m nervous about doing it.”

“Of course you are,” Sal said. Kendall settled on the bench and watched the people and cars as they navigated the narrow street. “This is going to be different with all new people, but I know you’re right for this part. I’ve represented many people who’ve gone from Broadway to Hollywood over my career, and rarely have any of them received a vehicle as perfect for them to make the transition as you have.”

“But, Sal, they’re going to lock me in a car,” Kendall said as he half watched out the window.

“Don’t take that tone with me. I know how you feel about enclosed spaces, but that’s why it’s perfect for you. Use that fear in the movie. Let them see what that does to you and your character. Don’t run from it—embrace it. Trust me,” Sal said, and Kendall sighed softly. “I told you it was perfect.”

“If you say so,” Kendall said as a cab pulled up in front of the building. “As I said, I’ll be sure to call you Monday morning.” The cab door opened, and Johnny got out. “I need to go. Johnny just got home from the library, and I need to get dinner ready.”

“You two have a big celebratory night planned?” Sal asked.

Kendall’s smile at the thought lasted until he saw another man lean out of the cab. He appeared to be speaking to Johnny. The other man disappeared from view back in the cab, and Kendall saw Johnny lean inside the vehicle for a few seconds and then back out once again. Johnny closed the cab door, and Kendall could have sworn he saw a huge smile on Johnny’s face before he disappeared from view.

“Kendall, are you there?” Sal asked.

“I’m here,” he said. “Tell the people in Hollywood I’ll do it.” Kendall said. Maybe three or four months on his own to explore a bit and figure out what he really wanted wasn’t such a bad idea, after all.