Today is the release day for Dirk Greyson’s Sun and Shadow!!!!  Flails arms like Kermit.  This is the second story in the Day and Knight series.  The third Dawn and Dusk has already been written with a fourth and final story planned.  I hope you all relay enjoy this story.  There is plenty of action, drama, fun, and heat packed into it! 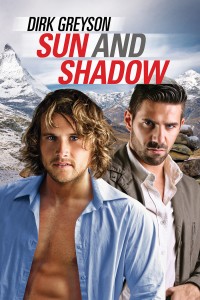 Dayton “Day” Ingram is recovering from an injury suffered in Mexico—and from his failed relationship with fellow Scorpion agent, Knight. While researching an old government document, Day realizes he might be holding the key to finding an artistic masterpiece lost since WWII.

But the Russians are looking for it too, and have a team in place in Eastern Europe hunting it down. Day and Knight are brought back together when they are charged with getting to the painting first.

Knight wants to leave Mexico and everything that happened there behind, and return to the life he had—except it wasn’t much of a life. When he’s partnered up with Day, keeping his distance proves to be challenging. But Day is as stubborn as Knight and isn’t willing to let him walk away.

Their assignment leads them through Germany and Austria with agents hot on their tail—agents willing to do whatever it takes to get to the masterpiece first. If Day and Knight can live long enough to find the painting, they might also discover something even more precious—each other.

“Excellent.” Dimato looked down at the file and then back up at him. “Catch up on your e-mail and things, and then come to my office in an hour. I have a task that I think is right up your alley. It’s research to start, but it could quickly turn into more.” He smiled and then continued on his way down the aisle of cubicles. Day sat down and booted up his computer, then opened e-mail, groaning at the hundreds sitting in his in-box. He began sorting them and managed to get through all of the routine things. The rest he answered or forwarded to the appropriate people before meeting Dimato in his office.

Day did and sat down. “What can I help with?”

“You’ve been watching the news on television,” Dimato prompted, and Day nodded. “Then you know that the current Russian president is becoming more and more like Stalin with each passing day. He’s moved to reintegrate many of the former Soviet republics back under Russian control, and we believe Eastern Europe is in his sights next. But they’ve had a very good taste of freedom, and it isn’t likely he’ll succeed easily there.” Dimato paused a moment, and Day nodded his agreement. Dimato wasn’t telling him anything he hadn’t heard already.

“We’ve intercepted some communications from the Russians, and I need you to use your linguistic skills to see if what we believe they’re talking about is possible.” Dimato passed him a file.

“I can do that,” Day said as he took the file and opened it to the first page.

“They’re looking for something that may have been lost during World War II. I skimmed the file, and I couldn’t determine what they were hunting for. But you may be able to figure it out.”

“Make it your top one for now. My instincts are telling me there’s more here than we’ve figured out so far. It looks like they’re hunting for a work of art, but the Russians wouldn’t spend a great deal of energy and time on something unless it was important. What we intercepted was from the military, so it’s important enough that they’re involved, and we need to know why.”

“I’ll get on it right away,” Day stood, holding the file, his heart beating a little faster. This was what he’d come to Scorpion Logistical Services to do, and it made his blood race. He loved unraveling mysteries and puzzles. He hoped the one he held would be interesting.