My alter ego, Dirk Greyson, has a release coming on Monday, August 31.  Challenge the Darkness is my first paranormal story in quite a while.  I wrote a shirt story in the Three Fates anthology with Amy and Mary.  Before that I think we have to go back to the satyr stories I wrote when I first started writing.  I have written two stories in the series so far and I hope to be able to continue it.  In this story we meet Denton and Mikael, the alphas of two nearby packs who are threatened by a common enemy.  When they meet for the first time, they discover that they’re mates… and both equally protective of their packs, as well as stubborn as mules.    I had a ball writing this story, as well as the second one Darkness Threatening.

There is one thing in this story that was amazing to play with.  The Mother goddess communicates with Mikael and I had a ball with her.  When you write something new, you learn things and what I learned in this story is to give all characters a personality… even the goddesses.  🙂  Enjoy this sneak peek. 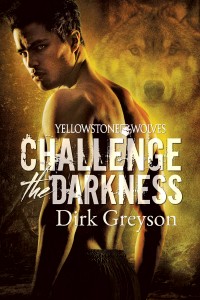 When alpha shifter Mikael Volokov is called to witness a challenge, he learns the evil and power-hungry Anton Gregor will stop at nothing to attain victory. Knowing he will need alliances to keep his pack together, Mikael requests a congress with the nearby Evergreen pack and meets Denton Arguson, Evergreen alpha, to ask for his help. Fate has a strange twist for both of them, though, and Mikael and Denton soon realize they’re destined mates.

Denton resists the pull between them—he has his own pack and his own responsibilities. But Mikael isn’t willing to give up. The Mother has promised Mikael his mate, told him he must fight for him, and that only together can they defeat the coming darkness. When Anton casts his sights on Denton’s pack, attacks and sabotage follow, pulling Denton and Mikael together to defeat a common enemy. But Anton’s threats sow seeds of destruction enough to break any bond, and the mates’ determination to challenge the darkness may be their only saving grace.

His home was a larger version of the guest quarters. Exposed beams, paneled walls, heavy, masculine furniture—it was the home of a man. His mother had done her best to soften the place when she and his father had lived here, but she knew the battle was lost once Mikael took over. He liked things simple and didn’t do fussy. However, that didn’t mean he hadn’t let his mother help him decorate. The walls were filled with pictures of his family and pack. This great room was the center of the pack and where everyone spent a lot of their time.

Mikael threw his dirty clothes in the hamper and went right to his bathroom, where he brushed his teeth and took a shower before crawling into bed, envying the boys who had someone to curl up with at night. He’d slept in a pile with his brothers and sister until they’d found mates and had families of their own. Now, as alpha, he slept alone, just like as leader he alone made decisions and accepted the consequences that affected his entire family. He hadn’t really understood what his father had done and how effortlessly he seemed to do it until Mikael had taken over for him after his death. He had known he was expected to lead, and he thought he’d been prepared for it. But after five years, there were still times when he wondered if he was strong enough to protect his family. After tonight he wondered that even more. Could anything protect them from Anton should he turn his sights in the direction of Mikael’s family?

The meadow was unlike any he’d ever seen or smelled before. Wait… yes it was. Somewhere from deep inside, a long-faded memory, one nearly dead, sprang to life. The sky was bluer, the wind fresher, the trees more pungent, the breeze perfect. He stood with nothing between his skin and the kiss of the breeze. This was her domain, and he remembered the first and only other time he had been here.

“Your fears are well-founded.” She stepped from behind a tree, the sun forming a type of halo. Her eyes were as dark as a night sky with stars transforming the blackness from menace to beauty, for that’s what she was—beauty personified, with lips the color of the strawberries that covered the small glen near the compound in early summer, and hair the color of summer wheat.

She didn’t need to explain. Her meaning was clear as an image of Anton in wolf form filled his mind.

“The last time you were here I showed you your mate. Remember him, and remember that you will need each other far more than you will initially realize.”

Mikael lowered his gaze. “I understand,” he repeated.

“No, you don’t, but you will eventually. Remember that I have chosen him for you.”

“I will,” Mikael said because he had no choice. She was his goddess, the one who had seen the pack through the decades of darkness and eventually found a way for them to rejoin the light. He owed her everything.

She chuckled and her eyes danced, galaxies whirling in their depths. “It may not be as easy as you think.” She was clearly taking some enjoyment in this. “You will need to face him.” Anton as a man flashed in his mind. “But how you face him will be up to you.”

“Why are you telling me this? Isn’t Anton one of your children too?” Goddesses were a mystery, but it seemed they should play fair.

“No. He is definitely not one of my children. He is not of the light.” She turned as birds glided down to her head, landing gently in her hair. “I must go, and you must return.”

“Why tell me this?” The light faded and the meadow with its trees and green disappeared into the darkness.

Mikael opened his eyes and breathed in the familiar scents of home. He was back in his own bed. Damn, goddesses were flashy.

“Don’t complain—I could have taken you to the North Pole.”

Gentle laughter filled his head and then faded away. He lay still and hoped she was gone as he shivered slightly at the thought. He got up and walked to the window, pushing the curtains aside before staring out into the darkness. Whatever that dream had been, the message was clear. He’d already known he had a mate out there somewhere, and he assumed that the experience he’d just had meant he was going to meet him soon. After a few minutes, he turned, pulled the curtains, and went back to bed. He needed his sleep for what he was going to have to do tomorrow.

4 Responses to “Take A Walk into the Wild”