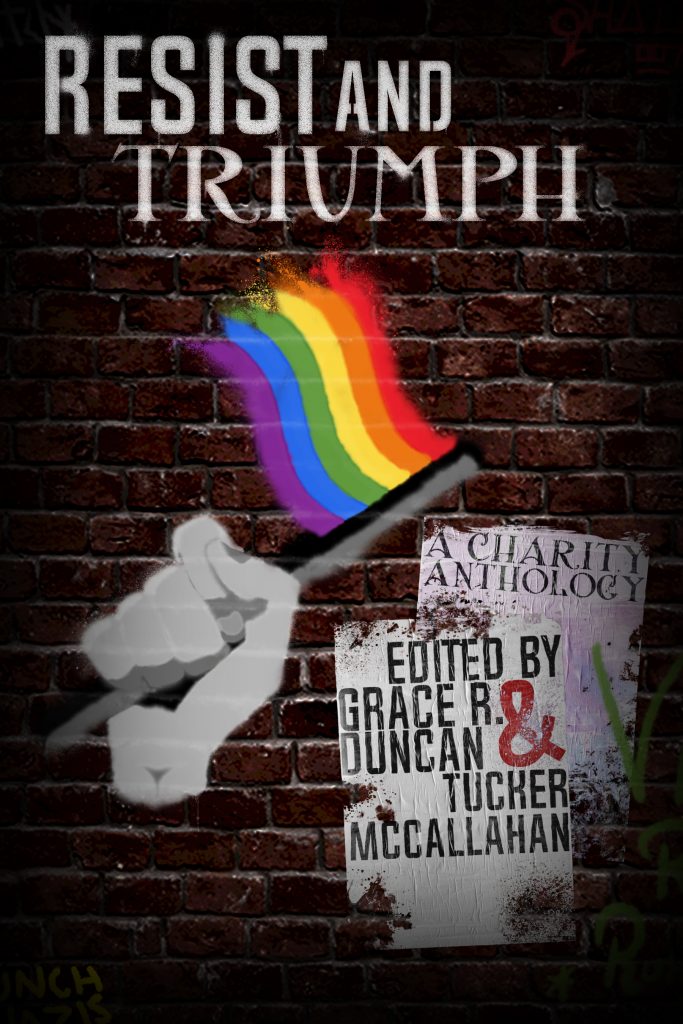 First I’d like to thank the inestimable Andrew Grey for having me on his blog. Thanks, Andrew!

The Resist & Triumph Anthology was the brainchild of Grace Duncan, and I was privileged to be able to serve as a co-editor as well as a contributing author. It’s always exciting to me when artists come together and give of their talents; I think it’s such a wonderful way to both bring attention to issues and effect change. The stories in the anthology cover a wide range of genres; everything from historical romance to dystopian future fiction. What they have in common is LGBT characters triumphing over adversity, a salient and meaningful theme right now. Here’s the anthology blurb:

No matter what we face, we can fight and overcome it.

As 2017 opened, the United States took several steps back in the progress toward equality. In response, a group of authors has stepped up to offer positive stories of hope and love. In an effort to help fight and support those groups who are facing even greater challenges, we wrote these stories to offer a small amount of aid.

Stories of hope, resistance, and ultimately triumph fill the pages of this anthology.

All proceeds of the anthology go to The Trevor Project and GLAAD to help fight the effects of the dark times we’re facing.

Like a lot of my work, “Consummation” was the result of me reading something and thinking, I can do better than that. The work in question was the biblical story of Esther. I was looking something up – I don’t even remember what now – and came across the story of Esther and Mordecai. My take is wholly different, but it did grow out of me reading the Christian Bible. I chose both the time period and the location of the story very deliberately. The 1880s were a time of change and upheaval as America continued the Western Expansion movement, and the frontier (part of the West that wasn’t yet divided into states) was a wild place where anything could happen. “Consummation” combines all of those elements in a story of yearning, love, and finally, redemption.

“Six.” Mr. Caswell removed his hat and wiped his brow with a handkerchief. It was mid-July and boiling hot out under the unforgiving sun. Matthew Caswell wished he could go back to the bank in Blind Curve, but neither his partner, Charles Denton, nor their guest, Hank Black, would put this visit off any longer.

“Not bad.” Hank Black surveyed the ranch’s buildings with a proprietary air. He wore a three-piece suit and looked very tony. If he was too warm, it didn’t show.

Dr. Sistani saw the three men approaching. He’d settled right in at the Perez Ranch. His abundant skill, education, and kind, gentle manner were all apparent in his work, and he’d made himself an asset. In exchange for food and lodging, Mordecai allowed the doctor space to practice. Better than that, he hadn’t revealed Dr. Sistani’s secret to anybody, for which the doctor was profoundly grateful. He finished bandaging a minor laceration on little Katydid’s arm and gently patted her shoulder. “There you are, brave girl. Run and fetch Mordecai now.”

The girl smiled and took off across the dusty thoroughfare. Sleeves still rolled up above his elbows, Dr. Sistani rose and walked out to greet the three men.

“Hey Doc.” Mr. Denton shook the doctor’s hand. He gestured at the supply barn. “You doing your doctoring in a barn now?”

“Mr. Perez was good enough to clear some space for me, yes. I do believe I shall require a building of my own soon.”

“Well now, you know, we have a spot in town sitting empty.”

“That’s right,” Mr. Caswell said. Sweat rolled down the sides of his face to disappear into his beard. “The place Ben Carver built. Next time you’re in town, you stop by and somebody can show it to you. It’d make a fine place for a doctor.” He glanced at Hank Black and then back to the doctor. “Begging your pardon, of course, but we need to see Mordecai.”

“Of course. You gentlemen can go to the house and check your guns. I’m sure Mordecai won’t be long.”

Hank Black’s very firm declaration made the two bankers uneasy. They glanced at each other; both men knew the ranch rules where firearms were concerned.

“I’m sure you’ll find it more comfortable in the house.” Dr. Sistani knew the ranch rules, too, and Mordecai wouldn’t like this. “It’s so warm out here in the sun.”

Hank Black’s cool voice cut off what were undoubtedly words of agreement from Mr. Caswell.

“No thank you. Where might we find—” He paused and looked at Mr. Denton. “What’s her name?”

“Miss Perez is in the smithy.” At the men’s startled looks, Dr. Sistani continued. “I’m afraid our esteemed blacksmith was needed at home today. Miss Perez is minding things in his absence.”

“His wife presented him with his eighth child at almost three hours past midnight.”

“Charming,” Hank Black murmured. “You know where the smithy is?” he asked Mr. Denton.

The three men tipped their hats to Dr. Sistani and walked away. The doctor gazed after them before going back into his makeshift clinic. Mordecai would be none too happy to see the two bankers. In the three and a half months since word reached the ranch of Richard Bancroft’s death, the two bankers from Blind Curve had made quite a nuisance of themselves. When they weren’t badgering Mordecai about when he planned to finally marry his former sister-in-law, Liza, they inserted themselves—and their bank—into ranch business.

Though his horse’s leg had healed some time ago, Dr. Sistani had lost his desire to continue on to California. Blind Curve had no town doctor, and between townspeople, the ranch, and stagecoach travelers, the doctor had patients aplenty. He hadn’t lied to the bankers about wanting his own place, but he had no wish to move closer to town. The only wish Dr. Sistani had was to move closer to Mordecai Perez.

Dr. Sistani had figured out several things since his arrival at the ranch. Though formally betrothed to Liza, Mordecai wasn’t in love with her. Dr. Sistani would’ve bet a brand new set of surgical tools on the notion that it was Esther who was in love with Liza Bates-Perez. Though the two women were impeccably discreet, their love and affection for each other was obvious to a man trained to be observant. Also obvious was the fact that Esther hadn’t shed a single tear for Richard Bancroft, while Mordecai was still not over his grief. Dr. Sistani hadn’t said a word about his suspicions; he valued his place at the ranch too much to risk offending any member of the Perez family.

Despite providing his services these last few months, Dr. Sistani hadn’t been able to get Mordecai to open up to him. At first the doctor assumed it was a matter of trust, that Mordecai couldn’t trust him because he’d disclosed his shameful secret to the man. He’d even believed for a time that it was their religious differences, since Mordecai—like everybody on the ranch and in Blind Curve—attended the Protestant church in town every single Sunday morning. But now, after living and working side by side with Mordecai for several months and after speaking to both Esther and Liza, Dr. Sistani thought otherwise. Since Richard’s death, Mordecai had given up his hopes and dreams. He moved through life, doing the things he had to do, but took no joy in anything. Injuries and diseases were difficult to cure, to be sure, but healing somebody’s spirit was a task of mammoth proportion.

Mordecai Perez was worth the effort.

A loud clang brought Dr. Sistani back to the present, but it was the shouting that made him bolt outside to investigate.

“No-good-goddamned-mangy-scoundrel!” Esther was in full voice, and she held nothing back as she screamed at Hank Black.

The two bankers did their best to get between Esther and Hank, who looked to be as furious as Esther.

“You want to throw punches like a man, you better be able to handle getting hit back.”

“You touch me again and I’ll kill you dead!”

“I’d like to see you try.” Hank smirked at Esther, which only increased her fury.

Mr. Denton prudently chose not to put his hands on Esther, but he stood directly in her way as Mr. Caswell hovered beside Hank Black. Dr. Sistani ran forward, eyes on Esther’s hands. He sighed in relief when he saw she wasn’t holding her hammer. Thanks to all her work at the forge, Esther was stronger than any man on the ranch, save for Jay-Dubya.

“Get outta the way, Denton,” Esther growled. “This scum-sucking piece of shit needs an ass-whipping!”

“You best shut your foul mouth before I knock the teeth out of it.” Black’s voice dripped with contempt.

“You couldn’t knock foam off a beer!” Esther spat, and the entire wad of tobacco she’d been chewing on all morning flew over Denton’s shoulder to land on Black’s pristine waistcoat. He roared like an injured lion.

The rifle blast froze everybody in their tracks.

If you’d like to read more of “Consummation” or any of the other wonderful stories we’ve put together in Resist & Triumph, you can find it here.

Tucker McCallahan is a professional author, editor, playwright, and researcher whose resume looks like an exercise in espionage and identity theft. Tucker knows a little bit about everything, making them an insufferable know-it-all. When not staying up all night, texting like a fiend, or of course, writing, Tucker can be found playing any number of table-top role-playing games, though it’s a good bet it’ll be Dungeons & Dragons, and Tucker will be wielding the Finger of God as the resident Dungeon Master. Tucker lives in a polyamorous household with a legal spouse, several partners, children, an all-black cat named Emperor Inka, and a fish tank full of gay fish.