Half a cowboy features a character who uses a cane largely for balance.  Its because of an injury he sustained years earlier.  He came to me because of two friends of mine who use canes to get around.  They are dear friends and amazing people.  And when they shared some of their stories with me about how difficult it can be to navigate the world with a cane, it made me angry.  Very angry.  A lot of the things we take for granted become harder if you need a cane.  For example you only have one hand free.  Or when they fly on a plane, the cane has to be stowed in the overhead.  That’s wonderful until you need to get up and have to call someone to get the cane so you can use the rest room.  Need i go on.    It boggles me how something as simple as requiring a cane and turned something we all take for granted into a nightmare.

It was thinking of them and some of the things they told me, that was the genesis of this story.  So this is for them.  If they read this, they will know who they are.  I love you guys and miss you so much. 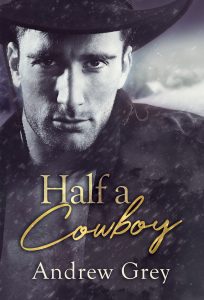 Ever since his discharge from the military, injured veteran Ashton Covert has been running his family ranch—and running himself into the ground to prove he still can.

Ben Malton knows about running too. When he takes refuge in Ashton’s barn after an accident in a Wyoming blizzard, he’s thinking only of survival and escaping his abusive criminal ex, Dallas.

Ashton has never met a responsibility he wouldn’t try to shoulder. When he finds Ben half-frozen, he takes it upon himself to help. But deadly trouble follows Ben wherever he goes. He needs to continue on, except it may already be too late.

Working together brings Ben and Ashton close, kindling fires not even the Wyoming winter can douse. Something about Ben makes Ashton feel whole again. But before they can ride into the sunset together, they need to put an end to Dallas’s threats. Ben can make a stand, with Ashton’s help—only it turns out the real danger could be much closer to home.

2 Responses to “Half A Cowboy – A Glimpse Behind the Story”