I thought I’d give you all a preview of Home and Family.  It released last Tuesday.  I spent part of my teenage years in the country.  I worked with plenty of animals, hauled hay and shoveled enough poo to last a lifetime.  Still it was a happy time.  We didn’t have a lot, but there was space and a chance to explore part of the world.  I remember it fondly. 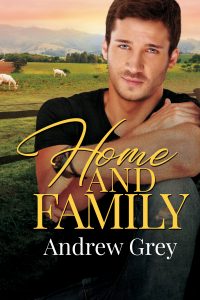 Mark has worked on Clay and Dell’s farm for a year, and he’s now in charge of the care and feeding of their growing herd of goats. He’s worked hard to provide for himself and build a life of his own. But with the operation continuing to expand, additional help is needed.

Isaac lives in a self-sustaining, simple-life community a few miles up the road. He’s spent his life working and wondering what the outside world might be like. When his father requires him to earn outside money, he asks for a job at Clay and Dell’s farm.

What neither Mark nor Isaac expects is a friendship that quickly grows into something more. But their feelings for each other go against everything that Isaac has been taught, and acting on those feelings will mean leaving the only way of life he’s ever known.

Together, Isaac and Mark are going to need a great deal of strength to weather the storm that’s sure to head their way.

“Hi,” a boy of about seven said from behind him, startling Isaac out of his thoughts. He carried a small shovel. “Poppy said I should help with the poop.” He scrunched his face and began shoveling the runway behind the goats to clean away their mess. “What’s your name? I’m Archie, and this is Gordon.”

“I’m Isaac.” He continued working, watching the boy to make sure he was okay. It seemed Archie knew what he was doing and had the mess cleared away pretty quickly, the dog following him wherever he went, his tail wagging.

“Poppy said you were starting today.” Archie finished wielding the shovel that was almost as big as he was and then reached into his pocket, pulled out a plastic bag, and gave each goat a treat.

Archie grinned. “Goat cookies.” He handed one to Isaac, who looked it over and smelled it before tasting a corner. It was pretty good. “Daddy buys them for me. They’re really animal crackers for people. But I call them goat cookies.” He finished passing out his treats and cleaned up some more of the mess.

Working together, he and Archie finished up the milking process and sent the last of the goats back into their pasture. Then Isaac cleaned up the shed, hosing down the milking area.

“I see you know what you’re doing,” Clay said from the doorway.

“He does, Poppy. He even ate a goat cookie.” Archie grinned as he hurried over. “And the goats liked him. They didn’t try to bite him. Not once.” That seemed to be high praise.

“That’s really good.” Clay looked around. “You did a good job cleaning up too. We milk twice a day. The first time is about seven in the morning. So, if you really want the job, it’s yours.”

Clay smiled. Now come on inside. I have some supper on the table, and anyone who worked like you did is going to have an appetite.”

Isaac looked at the food his mother had sent. His father would probably be upset if he ate here, something about polluting their bodies with chemicals, but his mama had always said it was polite to accept when someone offered something. If it was sincere, his mama had told him, then folks can be insulted if you turn them down. Always say please, thank you, and never talk back.

“And you,” he turned to Archie. “Go inside and clean up good before dinner, and you’ll get an extra allowance for helping.”

“You want me for both milkings?” Isaac asked.

Isaac had only been counting on helping with the one, but the extra work and money would be good. “I’ll be here,” he answered, and followed Clay to the house. He paused outside the back door. He wasn’t sure what to do in a house like this. Once inside, he took off his boots because the others seemed to and looked around. The kitchen was about as big as half their entire house, warm and filled with the scent of roasting beef. His belly rumbled, and Isaac tried to remember the last time there had been beef at home.

The community existed on what they raised or made. They prided themselves on being as self-sufficient as possible. One family raised chickens, a lot of them, sharing the eggs and the meat with everyone. They also had goats that they raised for milk. There were a few head of cattle, but they were milked as well. One family raised pigs for the meat. The community had huge gardens for vegetables, and an orchard of apples and pears that they canned and sold at a small roadside stand. The women baked bread and made other goods for the stand, but mostly they ate and existed off what they had at hand.

“Go ahead and wash up, and then you can sit right here,” Clay said, then turned back toward Isaac. “Where are you going?”

“I need to use the outhouse,” he explained.

“The bathroom is right through there and under the stairs. Archie can show you where it is,” Clay explained, and Archie grabbed his hand and led him through the comfortable living area, with sofas and big chairs, to the bathroom.

Isaac felt stupid. He knew what a bathroom was. He’d seen and used them when he was in town. But he never really gave much thought to having them in people’s houses. No one in the community had one. They used outhouses, and that was the way it was. Isaac used the toilet and then washed his hands, luxuriating in the running hot water. Once he had dried his hands, he returned to the kitchen, where the others had gathered.

They all watched him as he sat down, taking off his hat and placing it under his chair. Clay carved the meat and began serving. Isaac wondered if they were going to say a prayer like at home, and when they didn’t, he bowed his head and recited one of the things the preacher said at meals before silently saying his amen. He lifted his gaze just in time for Mark to pass him the potatoes, followed by a huge bowl of salad. He took some of each and sat quietly.

At home, meals were almost silent affairs, broken up only by his father, who might ask a few questions. So this meal, with everyone talking and smiling, was a bit foreign. Isaac didn’t know what to say, so he kept to himself, enjoying the hearty meal and the beef that tasted like heaven. He ate the piece he’d been given and finished off the rest of the food, then set his knife and fork on the side of his plate.

“Would you like some more?” Mark offered, handing him the bowl of potatoes.

For a second Isaac didn’t know how to react. “I don’t want to take anyone else’s share,” he said softly, color rising in his cheeks.

3 Responses to “Home and Family”