After the liver dinner, the other guests left and Dominic and I ended up talking until the wee hours of the morning.  We talked about everything, except liver.  I did tell him about my dairy problem and poor Dominic was appalled.  I felt so bad because I didn’t want to hurt his feelings.   The dinner, other than the liver part, had been one of the best means I’d ever had.  I’d just had to eat very little of it.

Anyway, I’d like to say that one thing led to another, or that things got very romantic.  But basically I began to fall asleep and Dominic was worried about me driving home.  He is a sweetheart.  So we moved things to the bedroom.  Basically that night we slept together in Dominic’s twin bed.  We simply held each other and talked a little more before we both fell to sleep.

Actually, I don’t remember sleeping much since I was keenly aware of being next to someone I had growing feelings for.  The man was sweet and thoughtful.  We were both willing to take our time.  I do remember lying in the dark with his warmth next to me.  It was nice and I didn’t want to miss a second of it.

Unfortunately, even thought he next day was Sunday, I had to get up early.  So before six I was dressed and saying goodbye.  First thing, this isn’t one of those terrible morning after moments.  I was scheduled to catch a plane for Mexico City.  I will say that I remember saying goodbye to Dominic outside his door.  He was cute, sleep tussled, droopy eyes, wearing a pair of olive green boxers.  I kissed him goodbye and then rushed home to get my things and hurried to the airport.

I was gone the better part of a week and I talked to Dominic twice and even brought him back a handmade blanket that we still have and use in the winter.  I always think of that night when I see it.

More to come so stay tuned. 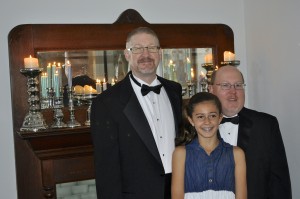