After the proposal, Dominic and I decided that we wanted our families to meet.  So we invited both sets of parents for Thanksgiving dinner.  Dominic was going to cook at his small house.  It was going to be just the six of us.

Dominic spent hours getting the turkey ready and making a very traditional dinner.  It was lovely.  The one thing he hadn’t done up to that point was tell his parents about the engagement and what our plans were.  His plan had been to tell them when he saw them at Thanksgiving.  So like a good fiancé, when they 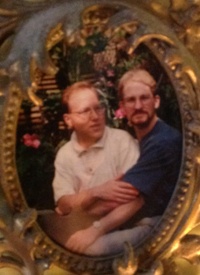 arrived and Dominic signaled that he wanted to talk to them, I made up some excuse to leave the house to give them privacy.  We figured it was a good idea.  When I got back, Dominic’s mother and father were sitting on the sofa and they looked at me as though I’d just arrived form outer space.  Obviously the talk hadn’t gone very well.

Continuing on through the house, I found Dominic in the kitchen, preparing the salad.  Now what those vegetables had ever done to Dominic was beyond me, but it was Samurai vegetable preparation circa I love Lucy.  We should have known his parents weren’t going to understand.  So with everyone upset, I went back into the living room and talked to them.  Explaining that we were planning a Commitment Ceremony to demonstrate the way we felt about each other.  I wasn’t sure they completely understood, but they stopped looking at me like I had three heads, so I took that as a plus and I was able to calm Dominic down before dinner was reduced to turkey burgers.

My parents arrived that afternoon and they met and got to know each other.  The mothers sat in the living room and talked and the fathers sat in the TV room and watched football.  (Neither watch football regularly, but it was something testosterony to do with another guy)  The amazing thing was that the mothers talked and they seemed to not only get along, but find someone they could talk with about being the parent of a gay kid.  In the end the food was great and the day a success, but the biggest win was the two mothers talking.  It really smoothed the way.

3 Responses to “Andrew and Dominic – Our Story – The First Thanksgiving”