I have to start by saying that I did not have much experience with serious boyfriends before meeting Dominic.  He and I met in February and I had agreed to take Dominic to his parents for Easter since he didn’t drive.  This was to be the first time meeting is very Catholic parents.  I will confess to being a little nervous.

The drive from Milwaukee where he and I were living to Green Bay was a little nerve racking.  Dominic of course said all the usual things.  When we arrived, his mom and dad came out to greet us and they were a little standoffish to me.  I had expected that.  It wasn’t as though Dominic and his parents had talked a great deal about him being gay.  He’d told them, but they just didn’t talk about it.  And here I was, the boyfriend.  They were polite and invited us inside where Dominic’s mother was cooking up a feast.

The one thing I have to say is that if you’ve seen any pictures of Dominic, you know he’s shirt.  Well in his family, he’s the tall one.  When I stepped into that house, I felt like the Jolly Green Giant.  His mom was under five feet and his dad might have been as well.  I actually hit my head on the living room ceiling fan light.

Dominic’s mother was an outgoing lady and we talked and got to know one another.  The meal was terrific and when we left she sent us home with food, and gave me extra of the dessert I liked.  But the most amazing thing was that when I said goodbye, Ramona gave me a hug and told me to be sure to come back again.  Other than Dominic himself, it was the sweetest surprise I’d gotten in years. 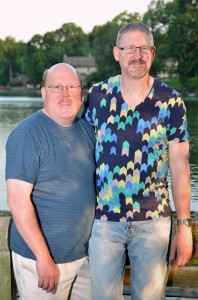 7 Responses to “Andrew and Dominic – Our Story – Meeting the Parents”