When I began the Carlisle Cops series, I set the stories in my own home town.  I love Carlisle Pennsylvania and Dominic and I have built our home there.  I have had a few dealings with the police, once when our garage was broken into, and again when the tires on our cars were sliced.  They were always professional and as helpful as possible.  It was after the tire slashing incident that I decided to write Fire and Water, the first story in the series.  Fire and Ice came to me because of a local news story that captured my heart and just would not let go.  (A child was found dead.  I’m being vague because I don’t want to give away too much of the story.)  Whenever that happens, I have to write about it.  I really don’t have a choice.  In this case, the real life story ended badly.  So when I was crafting Fire and Ice, I had Carter, a police officer hero, come to the rescue.  I often wonder what would have happened in real life if the child in the news story had been lucky enough to have found a hero to save him.  We all need a hero at some point in our lives, some of us are lucky enough to have found one.  I have been lucky and blessed in my life to have had more than one when I needed it. 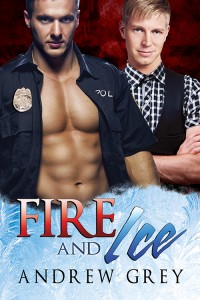 Carter Schunk is a dedicated police officer with a difficult past and a big heart. When he’s called to a domestic disturbance, he finds a fatally injured woman, and a child, Alex, who is in desperate need of care. Child Services is called, and the last man on earth Carter wants to see walks through the door. Carter had a fling with Donald a year ago and found him as cold as ice since it ended.

Donald (Ice) Ickle has had a hard life he shares with no one, and he’s closed his heart to all. It’s partly to keep himself from getting hurt and partly the way he deals with a job he’s good at, because he does what needs to be done without getting emotionally involved. When he meets Carter again, he maintains his usual distance, but Carter gets under his skin, and against his better judgment, Donald lets Carter guilt him into taking Alex when there isn’t other foster care available. Carter even offers to help care for the boy.

Donald has a past he doesn’t want to discuss with anyone, least of all Carter, who has his own past he’d just as soon keep to himself. But it’s Alex’s secrets that could either pull them together or rip them apart—secrets the boy isn’t able to tell them and yet could be the key to happiness for all of them.

Carter stifled a groan and responded. Domestic calls were the worst. Half the time it was nothing, like neighbors calling in because the people in the next unit were yelling too loudly. Most of the rest were people in need of help, but often they refused to press charges. Those were the most frustrating for everyone on the force. Carter pushed that from his mind, going as fast as he dared, reaching the house within minutes.

There was little doubt what had prompted the call. As soon as he opened his car door, high-pitched screaming rattled his spine. It seemed to be coming from inside the open-windowed row house. Carter called for backup and sprang into action. It sounded as though someone was being injured. Sirens blared in the distance and patrol cars arrived, blocking the street. Carter explained what he’d heard and the screaming began again, this time louder and more frantic. Officers spread out, and Carter headed to the front door. “Police,” he yelled and tried the knob. The door opened, and he rushed inside, weapon at the ready.

Carter heard other officers enter from the back. He quickly cleared the front rooms and the others the back. The house was quiet now, and Carter motioned toward the stairs.

“Get out of my house!” a man yelled as he barreled down the stairs, red-faced, eyes glazed over in rage.

“Down on the floor now!” Carter yelled forcefully and pointed his weapon at him, finger on the trigger. The man reached the bottom of the stairs, and Carter wasn’t sure he was going to stop. His finger began to move against the trigger. His training kicked in. “Get down!” he yelled again, and the man stopped and dropped to his knees. Carter inhaled and released his finger from the trigger, but stayed alert. There was at least one more person in the house—this guy wasn’t the person he’d heard screaming.

One of the other officers cuffed the man as Carter began climbing the stairs. He stayed close to the wall, gun in his hand, ready to defend himself. He reached the top of the stairs and heard crying. The officers behind him spread out, checking the other rooms while Carter moved toward the sound. He pushed open a partially closed door and gasped.

3 Responses to “Carlisle Cops – We All Need a Hero”