I really believe that everyone has some sort of superpower.  The thing is that sometimes it just takes us a while to find it and some of us are still looking.  While for some of us, our superpower is right under our noses the entire time.  I also believe that a lot of the time, we don’t recognize our own superpower, but others do.  Among other things, The Doctor’s Desire is about one man’s journey to his superpower.  I really hope you enjoy. 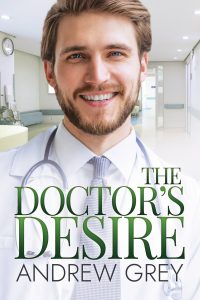 General practitioner Dustin Avarilla has been on the job for a few years—long enough to find out that some doctors, especially his boss, don’t see things the same way he does. Dustin believes that the patients come first, but his boss is more concerned with the bottom line. When Charles Morton brings his very sick niece in right at closing time, Dustin’s care starts trouble with his boss, but touches Charles’s bruised heart.

Charles is nearly frantic when his niece becomes ill. He’s had custody of Anna for only six months, following her parents’ sudden death, and he might be in over his head. Dustin is gentle and caring, which is just what his little patient and her Uncle Cheesy need. Charles feels his focus has to be on Anna, and the last thing he’s looking for is love. Dealing with a new job and town, along with becoming a parent, is almost more than he can handle.

Charles and Dustin meet again at a friend’s party, with heated attraction drawing them closer. One dinner leads to a date, with chemistry building by the second. But Charles’s mother, who feels Anna should be left in her care, and Dustin’s boss, who decides their relationship isn’t up to the family image of the practice, form an unlikely alliance that threatens to pull their budding relationship apart. While alone, they are vulnerable, together they might just get everything they desire.

Everyone had a superpower—Dustin Avarilla firmly believed that. Like his friends Amy and Karen. They shared the same one. In fact, they enhanced each other’s. Each worked with fiber, knitting and crocheting the most amazing things. Amy’s hats, like the light tan one he’d worn that morning, were amazingly soft and always fit, no matter what yarn she used. Like she just knew how many stitches to cast on and exactly when to stop. Karen’s scarves were always the right length, and they not only kept the chill off your neck, but seemed to warm the heart as well. His was currently strung around the hanger with his coat. Both the hat and the scarf were used most of the winter. Their handiwork, crafted with love woven right into the yarn they used, always made him feel cared for. Both of them seemed to know exactly what to make and what to give each person. Like the blanket Karen made for her daughter in the perfect shade of blue, out of the softest plushy yard. It felt like a cloud and was just the perfect weight—not too hot, not too cool, just right.

Or Dustin’s friend Bridget, who always seemed to know the perfect haircut. It didn’t matter if you had no idea what you wanted when you sat in her chair. By the time each client was done, their hair was exactly what they wanted.

And there were others Dustin knew who had these superpowers that made other people’s lives just a little happier through their thought and skill. Dustin admired all of them; he just wished he could figure out what his was.

His wants were simple enough at the moment: a good, stable job and dear friends. He also hoped for someone to share his life who didn’t only want him because he was a doctor. Yeah, that would be a really nice change.

“Are you done with that record?” Marcy asked as Dustin passed close to the desk. He nodded and handed it to her. “Mrs. Carter is in room one,” she told him, and went back to her work.

Dustin glanced down the hall and strode to the examination room. This was his first job as a newly minted general practitioner in a largish practice in Carlisle, PA. Dustin liked to think that he was good at what he did and that he was helping people. He comforted himself every night with the thought that that was what he was doing and why he had gotten into medicine in the first place. But to him, it didn’t seem like he was doing anything out of the ordinary. What he was doing certainly wasn’t any different from the three other doctors in the practice.

After a light knock, he opened the door and went inside. “Good morning,” he said as he scanned the medical chart from his iPad. “What brings you in today?” Mrs. Carter was one of the first patients he had seen when he joined the practice, and like on her previous visits, she listed a familiar litany of aches and pains.

“I’m hoping for something to help with the arthritis in my hands,” she said, holding them out, and he gently caressed her permanently curved fingers, careful not to move them too much.

“They’re inflamed more than they were when I last saw you,” he told her, and slowly turned her hands over to check the other side. He lightly stroked his fingers over her knuckles. Mrs. Carter’s hands were usually cold, so he held them carefully, the skin warming, his fingers gliding gently over her aged, thin skin. Without thinking too much, he reached for the pump of lotion and rubbed it into her hands.

Her breathing evened out and some of the tension eased out of her face. She didn’t say anything, and Dustin continued making small circles on the backs of her hands, easing up until he slipped his fingers away. “How is that?” he asked in a whisper. In his experience, massage was an intimate thing that happened between his hands and someone else’s body. He had never given it much thought, but it always felt to him like he should whisper and try to maintain the spell that came from something to simple and yet heartfelt.

“Much better,” she answered with a soft sigh. “I don’t like this time of year. Driving is hard, with the snow and ice, and it’s always so cold.”

Dustin nodded as understanding crept into his mind. “Try a heating pad in the evening,” he suggested. He didn’t want to say more, but he was willing to bet that Mrs. Carter had turned the heat down in the house she’d lived in for the past forty years in order to try to make the bills meet her fixed income. He knew things were difficult for her, especially after she lost Harold two years ago after nearly fifty years together. “There’s a market on the square in town each Wednesday, and one of the vendors who’s there this time of year—her name is Amy—knits mittens and fingerless gloves. I have a pair, and I wear them when I’m working. They might help.”

Dustin grinned, reaching into his pocket and pulling out the pair he brought with him because often when he was doing records at night, the office cooled down quite a bit. He handed them to her, and she tried them on, smiling and wriggling her fingers. She started to pull them off again, but Dustin gently stopped her hands. “Just keep them.” He turned back to his chart to make some notes, asking her about her prescriptions and making sure she didn’t need any refills.