Welcome to my blog tour for Waiting for Patrick. I’m offering giveaways of one signed copy, one electronic copy, and a choice of one title from my backlist. Comment below and at any of my other blog stops (posted below) to be entered to win. One comment, one entry. Dreamspinner is offering my other paranormal titles (Haunted, Lifeline, and  What No One Else Can Hear ) for $0.99 during “Weekend Reads” on September 2, 3, and 4, in honor of Waiting for Patrick being my ninth published book. Waiting for Patrick will be available at a discounted price throughout the tour (September 1 through 15). Winners of the raffle will be announced on September 16th.

In Waiting for Patrick, Sheri is Elliot’s best friend and there are several scenes that show how close they are. Sheri is currently dating Malcolm, with whom Elliot has also become friends, even though he constantly makes fun of his name. Here’s a missing scene in honor of today.

Elliot heard the doorbell and stood up from where he was painting the living room floorboard. After looking at the paint on his hands, and then the streaks of the same color on his old, stained, jeans, he brushed his hands down his pants and started toward the door.

He needn’t have bothered, however, since Sheri was letting herself in by the time he crossed the foyer.

“Hey Cher.” He opened his arms wide as though he was going to give her a big hug. She took one look at his paint covered clothes and skittered away. Laughing, he gestured toward the picnic basket she carried. “For me?”

Elliot shook his head. “One of these days you’re actually going to believe I have one.”

She snarled and headed toward the kitchen.

“So,” Elliot changed the subject, “Where’s your shadow?”

“Malcolm?” Sheri set out several plates of pastries she had made and a half gallon of what Elliot was willing to bet was homemade lemonade.

“No Sheri,” Elliot rolled his eyes. “You’re other boyfriend.”

“What?” Elliot was shocked. There was no way Sheri had been dating someone else and Elliot hadn’t known about it.

Elliot smacked her arm and then grabbed an éclair. “You are an evil woman.”

“And don’t you forget it.” She slumped down in her chair across the table from Elliot and grabbed a puff pastry. “Anyway, to answer your question, he’s in New York.”

“Why?” Elliot grabbed one of the napkins Sheri had brought and wiped up a dab of cream filling off the table.

“He went up to spend some time with his sister. He always does this time of year.”

“Of course. All of my comebacks are brilliant.”

“So,” Elliot leaned toward her. “Are you going to answer my question?”

“He visits his sister and her children on 9/11 each year.”

“Oh?” Elliot hadn’t realized Malcolm had been affected more than anyone else by the tragedy of the day so many years ago.

“Her husband died when the twin towers came down. She was supposed to be there too. She worked in an office two doors down. But she was home with Abigail, her oldest, who was sick.”

Elliot shook his head. “Man, you hear all kinds of stories like that.”

Sheri just nodded. “They’re all adults now, but the younger ones don’t even remember Rick. Abigail was five, and she only barely remembers him, but her brothers were three and four at the time. “

“That’s sad.” Elliot didn’t know what else to say. “So, Uncle Malcolm stepped in as male role model over the years?”

“Yeah, more or less. He doesn’t see them as often as he’d like, but they know he’s always available for them.”

“That’s good. That’s better than some had, I guess.” Elliot tried to see the positive in the situation but was having a hard time. “Still sucks to grow up without a dad.” Elliot’s own father had walked out when he was seven.

“Because of Uncle Malcolm?” Elliot grinned.

“Partially. I’m sure he helped. But Madilyn is fantastic with them.”

Elliot needed to lighten the mood, so he reverted back to the running joke. “Really? Malcolm—“and he teasingly sneered the name— “Has a sister named Madilyn?”

“Yes, Elliot,” she emphasized his name as she had at other times when Ellie was mocking Malcolm’s name, “And a brother named Marvin.” She glared at him, daring him to make next move.

Sheri, apparently, recognized Elliot’s ploy for what it was, and changed the subject. 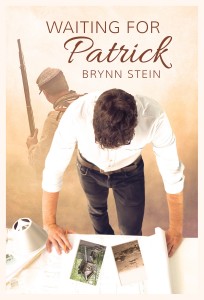 Architect Elliot Graham has bought and restored dozens of historic homes to their original splendor. As in his personal life, he loves them and leaves them, selling them off without looking back. But there’s something about the old plantation house he finds in South Carolina—a connection he can’t explain. He feels as though he recognizes the house, as if within its crumbling walls he might find something he doesn’t even realize he’s lost.

Ben Myers had promised his lover and soul mate, Patrick, that he would wait for his return. Ben has kept his word ever since Patrick left him to wait at the plantation house—during the Civil War. For the first time in many long years, Ben is no longer alone, and he reaches out to Elliot in dreams. Elliot tries to convince Ben that Patrick isn’t coming back, but Ben’s devotion is about to change not only his lonely existence, but Elliot’s life as well.

Brynn lives in Virginia near her two grown daughters who support her writing and sometimes act as proof readers. Both of her daughters are also aspiring writers and hopefully it’ll just be a matter of time before they have their own author’s biography.

Brynn was a teacher by profession for thirty years. She worked in special education with children with emotional disabilities. She has recently changed careers and is now working as a mental health counselor to this same population and their families. When she is not working or writing, she loves to draw and paint. She also gets outside as often as she can, reads anything that doesn’t move out of the way, and is always looking for her next story.