My writing area has recently changed. Originally, my space was a desk in the living room stuck between a big bookcase and the TV stand. I would write there while hubby watched TV. All of Crest Ridge Vacation, most of the expansion novella Crest Ridge, and most of Love on the Divide were all written in the middle of that living room. I wrote through the distractions for several years, until April 2014 happened and everything changed. 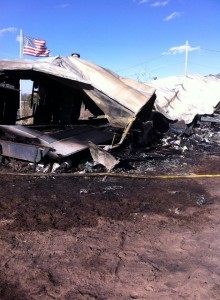 That photo is the remains of my former house. Everything was gone, including my writing space, computers, and all my notes. From April until September my space was a tiny TV tray table in a camper trailer. I had to finish Love on the Divide while sitting on that camper bench seat. Then our new house arrived, and I now have an entire office all to myself. I’ve never felt so spoiled. When we replaced the house, we specifically went for a three bedroom design even though there are just the two of us. We decided that we could have one guest room and one all-purpose/office space room. So, I now have a private space to work when I need it. 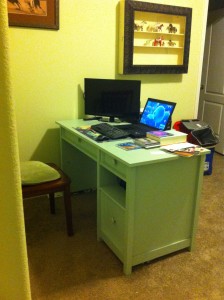 If I need to close the door and lock out the distractions of hubby watching TV, now I can. I also have a laptop table that I use occasionally so that I can work in the living room. The biggest problem with that is someone thinks I need help. 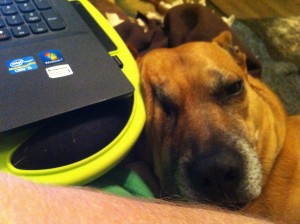 Here is my Jazzy trying to mooch and snuggle while I was trying to finish off The Dawn of Darkness for the Goodreads M/M Romance group writing event.

When I’m in my office working, she’s usually hanging out by the desk waiting for me to finish, but she can’t get up in my lap and snuggle.

So all my serious writing now goes on in my new office space, that also doubles as my craft room space. The closet in here is where I store my crochet and loom knitting supplies. 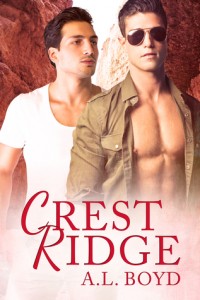 It was supposed to be their big night! The opening of their movie premier. Robert Owens boyfriend abandoned him, and brought another date. Humiliated, Rob left Los Angeles, and moved to a quiet ranch in rural New Mexico only to face his high school bully Dane Johnson.

Rob never expected his high school tormentor to show up at his new home, but there the man was ordering him to evacuate from an oncoming wildfire. After Rob returned to his ranch, Dane offered an apology, and an explanation of his past actions. Rob has to decide if the bully he once knew has changed his ways. Will they overcome their past and find a new start?

But it Now: Smashwords |Amazon

A cartographer by day, A. L. Boyd spends most of her free time with her horses, gardening, or reading. She never intended to be a writer, but stories like this one sometimes just pop into her head. The writing came about as a way to get the stories out.

Also by the Author