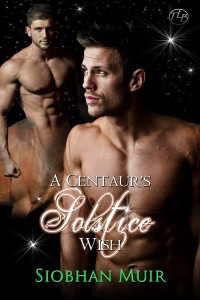 When making wishes on the Hunter’s star…
It will take more than wishes to improve Sedgewick Icetrotter’s Solstice. After being sent to the infirmary, again, for dislocating his shoulder while stringing his bow, he figures he’s got a snowball’s chance in hell to impress the centaur he loves. Until Corporal Ronin Creekjumper brings in two injured centaurs suffering from unusual insect bites, and Sedgewick knows how to treat them.

Ronin can’t believe his good luck when Sedgewick saves his men. It also gives him a chance to do more than light candles for his injured friend. Ronin takes the chance and invites Sedgewick to spend the Solistice holiday together. Just the two of them.

And a pack of hungry dire wolves who’d like to put Sedgewick on the menu. Who says Solstice can’t be exciting?

Ronin had never been so glad to see his injured soldier in his life. Sedgewick Icetrotter constituted one of the worst soldiers he’d ever trained, but he’d shown determination and persistence despite his setbacks. When he’d dislocated his left shoulder trying to string a bow, Ronin had seen the defeat in the younger centaur’s face along with the pain. Ronin’s heart ached for him, but he’d kept his words to himself. No need to compound his shame.

Now Sedgewick stepped forward, arm in a sling, with more confidence Ronin than had ever seen him display, and some of his tension melted away. By the Goddess, let him be able to do this. Ronin rarely prayed, but he wanted the best for Sedgewick. The man had a gentleness and beauty Ronin had never seen in any other centaur, and some part of him wanted to preserve that. It would be ruined by fighting and war.

“What do we do, Sedgewick?” Bethany fixed her green-brown gaze on the buckskin stallion. “Do you know what caused the welts?”

“Yes, Master Bethany. They’re called winter lace stars and they have a bad toxin that shuts down the organs if there are enough of them.” Sedgewick ran his hands lightly over the welts on Navarro’s arm and the man groaned. “We’re going to have to make an antidotal salve and smooth it over each of them.”

“Do you know what goes into the salve?”

“Yes. My granddam taught me.” He grimaced and wouldn’t meet Ronin’s gaze. “The problem is I can’t make it with only one arm.”

Ronin gripped Sedgewick’s shoulder. “I’ll help you. Just tell me what you need done and I can be your extra hands.”

Both Bethany and Sedgewick gaped at Ronin for a moment. Hellfire, he’d surprised himself with the outburst, but he wouldn’t go back on his offer. His men needed him and he’d do anything he could. And if you’re really honest with yourself, you’d admit you want to spend a little time with Sedgewick.

Bethany was the first to recover. “Thank you, Corporal. That will be very helpful.” She nodded to the injured men. “First, I’ll need you to get these men stripped so we can see the extent of the damage.”

Ronin stuffed his disappointment behind a sharp nod. “Will do.”

“Good. Sedgewick, please show me what you need and let’s get started.”

While Ronin helped the other soldiers to undress Navarro and Colver, he kept Sedgewick in sight as the buckskin directed Bethany in a soft but sure voice. The men moaned when they lifted their shirts and armor, and he cringed in sympathy. Great, swollen welts spread across their backs from skull to tail, disfiguring them in red sores.

Medicinal scents accompanied the grind of a pestle against a mortar bowl, and Ronin turned just as Bethany called for him.

“Can you please grind this while I prepare the salve base, Corporal?”

Ronin took the pestle as the human woman gave him a friendly smile and he tried to smile back, but Sedgewick’s presence beside him made it difficult. Oh, for the love of Epona, I should be able to do one simple task. He bent to it, putting his strength and focus into the action of grinding the medicinal herbs. He almost jumped when someone laid a hand on his forearm.

“Firmly, but gently, Corporal. Marble isn’t as good as the herbs for healing.” Sedgewick’s voice held amusement as well as warmth.

Heat blossomed across Ronin’s cheeks and chest. “Forgive me, Sedgewick. My concern is with my men.”

Sedgewick lost his smile and nodded, releasing Ronin. “Of course, Corporal. But if you grind them too much, they lose potency.” Sedgewick nodded to the mortar. “I think they’re ready. Bring them to the fire, please.”

Ronin regretted his words immediately and cursed himself for a nervous fool, but dutifully followed the buckskin soldier and swept the crushed herbs into a pot of boiling water. Sedgewick nodded and stirred them with a soothing rhythm, his good arm flexing in ways that set Ronin’s heart galloping. Sweet Goddess, what I’d give to feel his arms around me.

Ronin mentally balked at the uncharacteristically tender thoughts and shook his head. “Must you keep stirring?” The question came out harsh, but Sedgewick smiled.

“Yes. It’s necessary to boil them down to their essences.” He shrugged. “Long work, but worth the effort.”

He stood beside Sedgewick, watching him stir the pot of herbs in a companionable silence. His motions added a level of comfort to Ronin’s world, an unusual sensation, and one he’d sorely missed. It reminded him of times spent with his dam while just a wee colt, when she’d ruffled his hair and told him he’d someday find a mare of his own to stable.

Ronin mentally shook his head. Despite his mother’s prediction, he’d never been interested in mares or mating. His focus had been on the military life with his brothers-in-arms. He’d striven to be the best soldier and leader to those who depended on him. It had been all he needed.

Siobhan Muir lives in Cheyenne, Wyoming, with her husband, two daughters, and a vegetarian cat she swears is a shape-shifter, though he’s never shifted when she can see him. When not writing, she can be found looking down a microscope at fossil fox teeth, pursuing her other love, paleontology. An avid reader of science fiction/fantasy, her husband gave her a paranormal romance for Christmas one year, and she was hooked for good.

In previous lives, Siobhan has been an actor at the Colorado Renaissance Festival, a field geologist in the Aleutian Islands, and restored inter-planetary imagery at the USGS. She’s hiked to the top of Mount St. Helens and to the bottom of Meteor Crater.

Siobhan writes kick-ass adventure with hot sex for men and women to enjoy. She believes in happily ever after, redemption, and communication, all of which you will find in her paranormal romance stories.

Siobhan’s latest release, A Centaur’s Solstice Wish, is the second story in her new Rifts series. She has published A Hell Hound’s Fire (a free read), The Beltane Witch, and Cloudburst Ice Magic in the Cloudburst Colorado series. Siobhan has also published Bronco’s Rough Ride and The Navy’s Ghost in the Bad Boys of Beta Squad series, Not a Dragon’s Standard Virgin and Queen Bitch of the Callowwood Pack through Siren Publishing, and Her Devoted Vampire through Evernight Publishing.