Hard Road back releases May 5 and its quite a ride.  This was one of those stories that just stuck with me.  I wrote parts of it while I was on vacation last summer.  It was pretty amazing.  I was on vacation in both body and spirit.  I’m always amazed at hw a story can transport me to another place.  What’s really fun is when the one I’m working on does that for me.  This one was very much like that.  I got to ride horses, have th wind ruffle my hair, go on adventures, and then come home, all without leaving my sofa.  As I get older that kind of travel is becoming my favorite of all. 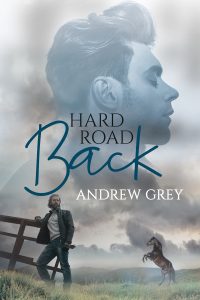 Rancher Martin Jamuson has a deep understanding of horses. He just wishes his instincts extended to his best friend, Scarborough Croughton, and the changes in their feelings toward each other. Martin may be the only friend Scarborough has in their small town, but Scarborough is a man of secrets, an outsider who’s made his own way and believes he can only rely on himself when the chips are down. Still, when he needs help with a horse, he naturally comes to Martin.

As they work together, Martin becomes more determined than ever to show Scarborough he’s someone he can trust… maybe someone he can love. Even if it risks their friendship, both men know the possibility for more between them deserves to be explored. But when Scarborough’s past reemerges, it threatens his home, horses, career, and even their lives. If they hope to survive the road before them, they’ll have to walk it together… and maybe make the leap from cautious friends to lovers along the way.

“Did you pick up a new horse?” I asked as we got closer to the paddocks. Beau stopped, plopping his butt on a small patch of scraggly grass, watching, his tongue lolling, but coming no closer. We turned the corner of the low barn, and I stopped dead in my tracks. A horse as black as midnight looked back at me with some of the wildest eyes I had ever seen.

I motioned to Scarborough to stay where he was as I took small steps forward. “That’s a good boy,” I said, letting the breeze carry the words to him, making him strain to hear. “My gosh, you are stunning.” He stayed still, but the wildness and fear in those huge brown eyes pulled at my heart. What the fuck had happened to this magnificent horse to make him that way? “I’m not going to hurt you. I just want to see you.” I didn’t reach for him and just spoke a string of nonsense words.

There was intelligence behind those eyes and the way they held my gaze. The horse began breathing more heavily, a front leg shaking, and Scarborough took a step back and then another. Finally the horse turned, raced to the far side of the paddock, stopped, and turned again to watch.

“Where did you find him?” I asked.

I sipped from my mug, completely surprised. That made no sense at all. Not that Scarborough didn’t go to auctions—he did. The man had a good sense about horses, and an even better one about anything profitable. Scarborough could make money, and, well, he didn’t spend it unless he thought he could get more. It was just that simple. I’ve known penny-pinchers in my life, but Scarborough made Abe Lincoln scream bloody murder before he spent anything at all. “Why did you buy him? You know there’s the possibility that he will never be of any use to anyone.” But damn, he was stunning as all hell, nonetheless. “What’s his name?” I turned to Scarborough just in time to see him roll his eyes.

“Whoever had him before actually named him Black Beauty.” Scarborough made a face. “I hate it.” He usually didn’t do that sort of thing, and I liked seeing Scarborough’s playful side. “I’m going to rename him, but I don’t know what yet.”

“Maybe he’ll suggest a name,” I offered, and Scarborough nodded but grew quiet once again. That was his usual way, and I was more than used to it. With Scarborough, you had to read between the lines quite a bit. And sometimes there weren’t even lines—you simply had to guess.

He lifted the mug slowly to his lips. “I thought you could fix him, and then I would use him for stud. His bloodlines are amazing, and… look at him.”

Was that softness I saw around Scarborough’s eyes, even for a second? I wasn’t sure, and any tenderness that was there didn’t last too long.

I nearly took a step back. Those words never crossed Scarborough’s lips. I wanted to put my hand over my chest to check that I wasn’t going to have a heart attack, or run to town to see the doc because I wanted to make sure I wasn’t hearing shit. “You sure?” There was so much fear and pain there that I wasn’t sure anyone could ever get through it, but for Scarborough I was willing to try. And if it was important enough for him to offer to pay me, then I would definitely do my best.

Scarborough nodded and mumbled an assent.

“Okay, I’ll do what I can. I’ll text you over an agreement that states my terms and rates, like with anyone else. If you agree, you sign and return it, and I’ll get started as soon as I can. Don’t let anyone near him for now, and feed and water him yourself. Let him associate both things with you. It will help. And for God’s sake, don’t stomp or make any sharp noises around him.”

I rolled my eyes. “Just be nice to him, okay? I know you can do that.” I smiled.