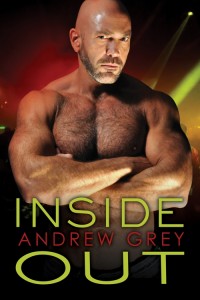 I can hardly believe I’m on the cover of a romance novel! When Andrew asked me back in June if I’d be willing to model for the cover of Inside Out, I was really floored. Of course I would! And it just so happened that the very same day a very talented local photographer, Joey FlyFoto, asked me if I’d like to participate in an unrelated project he was working on. How’s that for karma? I asked Joey if he could shoot some photos for the book cover in addition to the ones for his project, and he agreed. I got the go-ahead from my studio, TitanMen, and we shot the photos three days later. 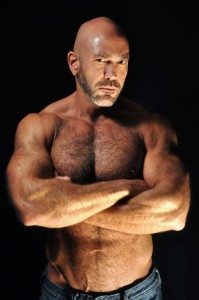 Andrew had asked for a photo of me “bare-chested, arms folded across the chest. The expression should be  serious. I think a knowing look would work. The character is a bouncer who has seen it all.” I have such trouble looking serious on camera, though. I can usually only hold a serious pose for about two seconds before I burst out laughing. There are plenty of silly out-takes, but a few of the pictures came out great. The one that Andrew chose for the cover is one of my favorites. I’m so  thrilled that I was able to contribute in this small way to Andrew’s amazing body of work, and I can’t wait to read Inside Out!