A Lion in Tails is my Christmas story for 2013 and part of Dreamspinner Press’s Advent Calendar.  This story came to me because I recently went through the process of purchasing a tuxedo and having it properly fitted.  That process spawned the idea for this story.  Below is the blurb and an excerpt.  Enjoy!!! 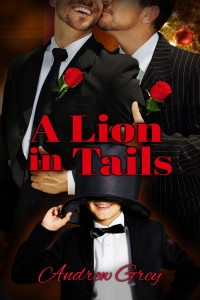 Larry Kincaid isn’t ready to be a parent, but when his sister dies in an accident, he takes his nephew, Angus, into his home. The change throws Larry’s life into limbo until he meets Joshua Langdon.

To Joshua, Larry is a lion: growly and strong, but too proud to ask for help. Joshua gets past his defenses and finds a place in Larry and Angus’s family, but Larry’s pride gets in the way. Can they turn their holiday romance into a relationship that lasts into the New Year?

A Lion in Tails has already has received a 5 Star review from Linda at the Paranormal Romance Guild and you can read that review here:  http://www.paranormalromanceguild.com/reviewsandrewgrey.htm

“Uncle Larry, can we get a real Christmas tree?” Angus asked pitifully from the backseat.

“Of course, but it’s too early to get one, and I have a party in a few days, so I’m hoping you’ll be willing to help me put up the big tree in the living room. When it gets closer to Christmas, we’ll put up a real tree in the family room,” Larry Kincaid promised.

“But Santa will come to the real tree, right?” Angus asked. “Does Santa know where I am? What if he comes to where me and Mommy used to live and I’m not there?” He sounded so plaintive it broke Larry’s heart.

“Santa knows where you live; I promise. But tonight when we get home, you can write him a letter, and I’ll help you mail it,” Larry said. He hoped Angus would ask more questions or talk about anything, but he simply sat in the backseat and stared out the window.

Larry’s older sister, Melanie, had died in a car accident on her way home from work four months earlier, and his five-year-old nephew Angus, according to Melanie’s will, was to be raised by Larry. Granted, they were the only family either of them had since Melanie never married and Angus’s father had never been part of his life and seemed to want nothing to do with him, but Larry still wondered what his sister had been thinking. His life was so not kid-friendly, but he had been trying and would continue to try for as long as it took. “What do you want for dinner?” Larry asked.

Angus said nothing. He did that a lot. Sometimes he asked questions, and Larry always answered them as truthfully as he could, but mostly he stayed quiet and withdrawn. So his questions about Christmas trees had caught Larry a little off guard. Angus mumbled something Larry couldn’t hear. “Nuggets,” he finally said a little louder.

Larry should have known. There were times when he thought Angus was going to turn into a chicken nugget—either that or a bowl of macaroni and cheese. “Okay. We’ll go through the drive-through and get you some. Then we can go home and you can eat.” No answer. “Will you help me put up the Christmas tree for the party?”

“Uh-huh,” Angus said. “Will there be kids at the party? Mama had a birthday party for me with all my friends. Will it be like that only for Christmas?”

“Not this party, buddy. It’s for grown-ups and the people I work with. But I promise there will be food you like, and you can watch a movie in the TV room.”

“I wanna be with you,” Angus said softly.

“Okay. You can be with me all night if you want. The women I work with are going to love you.” Larry paused for a few seconds. His Christmas party was always a big deal. He decorated the house lavishly and invited his colleagues and clients. It was an evening of glitter, glitz, and bling, with men in tuxedos and woman in evening wear and sparkling jewelry. How his party had become one of the social events of the year, Larry wasn’t quite sure, but it was. And because of that, he got a lot of extra clients who wanted him to manage their money. Larry pulled into the drive-through and placed the order for the food. Once he’d paid and received the bag, he handed it to Angus, who held it on his lap for the rest of the ride home.

When they pulled up and parked in front of the large Victorian painted lady he called home, Larry helped Angus out of his car seat and they walked inside. Angus knew he had to eat at the table, so Larry got a plate for him and poured a glass of milk. Angus climbed up into one of the chairs and began to pull out his dinner. Larry helped him, and then got himself some leftover pasta with pesto sauce out of the refrigerator and heated in the microwave. He sat with Angus, but they didn’t talk much. Angus ate silently, and when he was nearly done, he offered a nugget to Larry. He took it and chewed, smiling as Angus ate the last one.

For the past four months, since Angus had come to live with him, Larry knew he’d only been existing. He hadn’t made any plans. Usually in the winter, he booked a cruise for a week of fun in the sun away from snow, ice, and wind. But not this year. Things felt too unsettled for him, like he expected everything to change at the drop of a hat, the way it had a few months earlier when he’d gotten a phone call that his sister was dead and he needed to drive form Carlisle to Pittsburgh to get his nephew. Now he expected everything to change just as rapidly.

“Finish your milk,” Larry said gently. Angus nodded and emptied his glass. Then Larry took care of the dishes. “I’m going to go up in the attic and start bringing things down for the tree. Do you want to help?”

Angus climbed down off the chair and followed Larry up the stairs and then to the third floor. When Larry opened the attic door, Angus peered inside and then stepped back. “It’s scary,” Angus said.

“I know, so I’ll get the things, and you can help me carry them downstairs,” Larry said with a smile. He retrieved the tubs of ornaments as well as a few small boxes that he gave to Angus to bring along. The two of them carried down the decorations as well as the huge tree he kept in prelighted sections.

Once everything was in the formal living room, he moved the furniture and set up the tree. After it was plugged in and the lights adjusted, he and Angus began hanging the angels—hundreds of them. Of course, Angus hung them all low, and Larry had to do the rest of the tree, but he didn’t mind. A few times he lifted Angus up so he could put some of the ornaments higher on the tree. But after about half an hour, Angus went to sit on the sofa, curled up, and promptly fell asleep.