The Price releases at midnight tonight and I thought I would give you a preview. 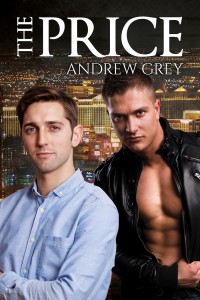 Hunter Wolf is a highly paid Las Vegas escort with a face and body that have men salivating and paying a great deal for him to fulfill their fantasies. He keeps his own fantasies to himself, not that they matter.

Grant is an elementary-school teacher who works miracles with his summer school students. He discovered his gift while in high school, tutoring Hunter, a fellow student. They meet again when Hunter rescues Grant in a club. Grant doesn’t know Hunter is an escort or that they share similarly painful pasts involving family members’ substance abuse.

After the meeting, Hunter invites Grant to one of the finest restaurants in Las Vegas. Hunter is charming, sexy, and gracious, and Grant is intrigued. With more in common than they realized, the two men decide to give a relationship a try. At first, Grant believes he can deal with Hunter’s profession and accepts that Hunter will be faithful with his heart if not his body. Both men find their feelings run deeper than either imagined. For Grant, it’s harder than he thought to accept Hunter’s occupation, and Hunter’s feelings for Grant now make work nearly impossible. But Hunter’s choice of profession comes with a price, which could involve Grant’s job and their hearts—a price that might be too high for either of them to pay.

Grant felt warm in the cool room and his heart raced a mile a minute. The energy between them had crackled all evening, and after this perfect meal, Grant was at a loss for what to do next. He knew he should simply let Hunter take him home and say good night. Hell, maybe that was all Hunter had in mind. Hunter could have anyone he wanted. So why would he want to be with him?

They lingered over coffee and then the waiter brought the check, which Hunter paid without looking at the bill. Once he’d signed the credit card receipt, they stood up and Hunter walked with him out of the restaurant.

“Do you want to test your luck?” Hunter motioned toward the casino.

“No, thanks. I’ve never had any when it comes to things like that.” Grant suppressed a yawn, and Hunter guided him toward the exit. It was night when they stepped out, but anything but dark. Lights shone everywhere, and the fountain in front of the hotel shot illuminated water high into the air, moving along with music that filled the air. Grant watched it for a few minutes, and before he knew it, Hunter had guided him over to the edge and they stood side by side, watching.

When the show ended, the water fell back to earth and the night seemed quiet for a few seconds. Grant turned toward Hunter, and he leaned in and kissed him. It was gentle, Hunter’s lips firm but soft against his, with just enough pressure to take his breath away. Grant expected the kiss to deepen, but Hunter kept it gentle. When he pulled back, Grant opened his eyes to find Hunter gazing right back to him, warm in the evening air. Neither of them moved. Grant swallowed and wondered what was going on behind Hunter’s deep brown eyes, but he didn’t ask. Part of him didn’t want to know. This was too nice to mess up with questions and explanations. The world and reality would do that fast enough.

“Let me get the car and I’ll take you home.” Hunter’s voice was a husky whisper.

Grant nodded, but didn’t move. It felt as though his feet were plastered to the sidewalk. Hunter didn’t move either, regardless of what he’d said, and after a few seconds, he leaned in to kiss him once again. Grant held his breath and let the happiness and excitement wash over him. The fountain started again, water shooting into the air, lights flashing, music playing, and it all seemed so right because all of it reflected the symphony and fireworks playing inside Grant’s head. When Hunter pulled away again, Grant blinked, and then they stepped away from the fountain. Grant didn’t see Hunter signal the valet or hand him his ticket. All he remembered was Hunter holding the car door for him, and he settled himself in the plush interior.