Dirk’s Lost Mate releases on Monday and I wanted to give you all a special preview of the story.  This is a new shifter series set in Michigan, near where Dirk and I grew up.  We hope you love it!!! 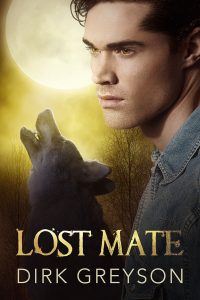 Wolf shifter Falco Gladstone knew Carter McCloud was his mate when they were in seventh grade, but school and the foster care system tore them apart. Years later, Falco is second in command of his Michigan pack, serving under an uncle who cares more about his own power than the welfare of their people. The alpha orders Falco to marry and produce offspring—but Falco’s already found his mate, and mates are forever.

Carter’s lonely life is turned upside down when he detects a familiar scent on the wind. The mates might have found each other, but their happily ever after is far from guaranteed. Falco’s commitment to Carter puts him at odds with his uncle’s plans, and when one of the alpha’s enforcers starts shadowing the couple, something must be done—something that will either cement their relationship or destroy it once and for all.

The bell rang, hurting Falco’s ears. He usually anticipated it, but today the raw clang that shook his eardrums took him by surprise. He already had his things together and left his last Friday class in a huge hurry, looking forward to a weekend of running with the other boys in the pack. At thirteen, the others his age weren’t ready for their first shift, but Falco could feel his wolf beginning to push toward the surface. Of his packmates, he had always been the one to experience everything first. Being the biggest and strongest, he’d developed faster than the others, which was both exciting and frightening. But he had his dad and uncle to help show him the way, and they knew just about everything about being a wolf shifter—at least, that’s what Falco thought.

He reached the hall, put his things in his locker, and grabbed his jacket and the one book he’d need for homework—thanks, Mr. Collins, Falco growled under his breath, his throat rumbling. Then he looked around, closed his locker, and headed out for the bus to take him home.

Falco reached the door to the middle school as a commotion caught his budding wolf hearing. He was still getting used to all the things his increased senses provided for him. The bell making him want to howl eight times a day was one of them, but it also warned him of trouble, like now. The early spring breeze, usually fresh and clean, carried the tang of abject fear. Falco scrunched his nose and shoved his book into Missy’s hands. “Carry this on the bus for me?”

“What is it?” she asked innocently.

“I’ll be right back.” He raced toward the back of the building and turned the corner to where two other boys—Falco knew their exploits well enough—had a smaller, blond-haired kid up against the wall.

“Just leave me alone,” the kid said forcefully, standing defiantly against the brick, staring back at both of them.

Falco had to give him credit—the kid had guts.

“What’s going on?” Falco asked in his best commanding voice, emulating the pack alpha as he stepped forward. He watched as the kid’s eyes widened and the smell of fear became more pungent. His uncle had told him once that sometimes fear was necessary in order to keep the order that a pack required. Falco had seen him put that into practice on a few occasions, but this was different.

“We’re just having a little fun. He’s a newbie, and we thought we’d see how fast the rabbit here could run before we brought him down,” Jason said with a vicious grin that indicated he was planning a lot more than just playing.

“Your fun’s over. The buses will be leaving soon.” Falco placed his hands on his hips, already tired of both of them.

Peter wheeled around as though he were going to fight, but stopped, eyes widening, and then he took a step back.

“Go on. Get out of here.” Neither of them were any match for him, and they both knew it. Falco was stronger than both Jason and Peter, and even together, Falco would clean their clocks, especially since his fingers and teeth were already tingling, preparing for a shift that he wasn’t ready for. “Go!” he growled, and they took off at a run.