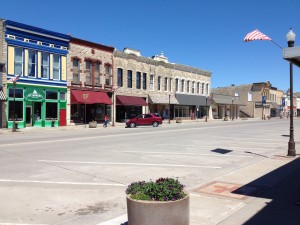 This past summer, I had to go on a business trip for the Evil Day Job I don’t have any longer.  I ended up in Kansas in June.  It was surprisingly green with rolling hills and river valleys.  Not the sort if place I expected to like, but it was quite lovely.   The trip required that I spend the weekend.  On Saturday I worked most of the day and on Sunday we needed something to do and on the freeway, we’d seen a sign for the Oz Winery in Wamego.  We had to see what that was all about and my boss loved wine, so that was a no brainer.  So late Sunday afternoon, we took off for Wamego.  What a treat it was.  The town looks like something out o the forties or fifties.  Its incredibly clean and immaculately kept.  We did go to the OZ Winery, but we also ended up touring the Oz Museum, passing Toto’s Tacos, and wandering between the buildings toward the park behind main street along the town’s version of a Yellow Brick Road.  When we visited the winery, we found out that the town celebrates OZtoberfest and I bought Dominic a bottle of ‘Ding Dong The Wine Is Red.’   It was idyllic to say the least. 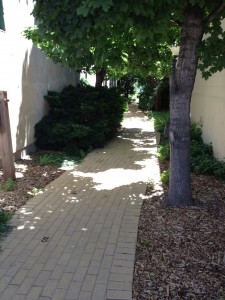 We had lunch in a small restaurant that overlooked the park and I had some simple, but amazing food.  Then afterwards we wandered the park with its cannon, stone windmill, model boat launch, and swimming pool where kids played and laughed in the summer heat.  Toward the back of the park is the small area where the town moved all the historic buildings.

Lucky for me, I had finished a novel just before I’d left on the trip and was in the mood for some inspiration.  The town was a perfect location and the ideas began to flow.  The result was Dumped In Oz and when I went back to Kansas, I followed that up with Stuck in Oz, and I will be starting Trapped in Oz soon.  While these stories have nothing to do with the fictional location, the town itself seemed OZian.  It was special and something very unexpected.  I hope I get top go back. 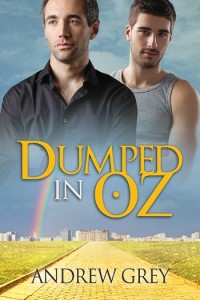 Dumped in Oz is available for Preorder at Dreamspinner Press