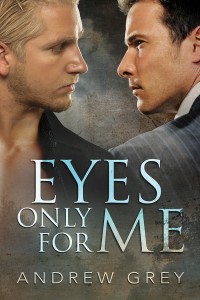 Eyes Only For Me is the result of some out of the ordinary feelings that I have had for a close friend.  I think I need to start this post by saying that I never came close to acting on these feelings because Dominic is so dear to me.  And I never would.  Dominic is the center of my life and I would never jeopardize that for anything.  But I was spending a lot of time at the gym and then afterwards at dinner and breakfast with him.  I should probably tell you that this guy is handsome, like fan yourself handsome.  Jet black hair, deep tanned, olive skin, beautifully built and he’s a lot of fun to be around.  (I’ve also seen him in the shower.  The man has no shame whatsoever, if you know what I mean.)  So basically, he’s HOT!!!   And like most guys when we see someone we think is hot, we think about what we’d like to do if that hotness was on offer.  My friend is straight, though I suspect not as straight as he thinks, but that’s okay.

Anyway I’ve wondered what sex would be like with my friend on multiple occasions.  And like most writers, when I begin to think about a topic, it gets the creative juices flowing and a story begins to develop.  The result of that is Eyes Only For Me.  This is friends to lovers, but much more than that.  Its also as close to a gay for you story as I will ever write.  (Actually I think this is more of a Bi for you story.)  Both characters are men around 40 who discover something about themselves as they take this journey of self discovery together.

There are a few surprises in this story.  There definitely was for me as I wrote it.  These characters had very definite ideas about what kind of story they wanted me to tell and both of them threw a full on hissy fit when the story veered away from their path.  (Just let me say that I got the strangest looks on the plane when I had two characters throwing a hissy fit in my head.  Don’t try that at home)

I thought I would share a little more of the background for Eyes Only for Me.  I hope you enjoy it!

2 Responses to “A Potential Sticky Situation”