With the release of Upside Down just a few hours away, I thought I would give you a brief sneak peek.  I really hope you like it.  I chose the moment Spook and Jeremy meet. Enjoy! 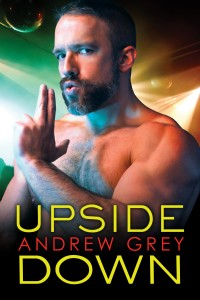 Jeremy Hodgson stood in line outside Bronco’s with his roommate, Tristan, and his friends Kevin and Zach. “Why are we standing in line?” he asked Zach. “You know they’ll let us all in the back door.”

“Bull’s working out front tonight,” Zach answered. The line moved forward, and soon they were at the front. Zach walked right up to Bull, his lover of almost a year. The man was intimidating as hell to look at, but he was a really nice guy once you got to know him. “Are you gonna frisk me?” Zach said, putting his arms in the air and wriggling his hips.

Jeremy put his hand in front of his face to keep from giggling as Bull’s eyes bugged out of his head. Zach was wearing this short, tight shirt, and when he raised his arms, a line of skin appeared. When he moved his hips, it was something to see. “I’ll frisk you later.” Bull took Zach’s arms and pressed them down as he kissed Zach. A chorus of “ooooohs” sounded from behind them.

“If I do that, can I get in for free?” a guy asked from behind them. Bull pulled Zach to him and growled loudly at the guy, who kept quiet after that.

“Go on inside, guys, and have fun,” Bull said, turning to Zach. “But not too much fun.” Bull swatted Zach on the butt, and the four of them entered the club. They found a table in one of the corners, out of the way, but where they would still be able to see the entertainment for the night.

“I’ll go get drinks,” Tristan offered, and Kevin went as well, leaving Jeremy and Zach alone at the table.

“What’s been going on lately? You’re quiet and standoffish. Is something wrong?” Zach asked, practically bouncing in the chair with his usual energy.

“Nothing anyone can help with. Tristan’s been dating this guy Eddie, you have Bull, and even Kevin was seeing someone, at least until last week, when he and Phil broke up.” Jeremy looked over to where their two friends were working their way up to the bar. “I haven’t had a date in six months, and the last guy I saw turned out to be a real loser who was more interested in merging our comic book collections than he was in me.”

“I thought Lenny was nice.”

“He was. But I found out that comic books were about all we had in common. He didn’t actually read anything else… at all.” Jeremy sighed softly and wished they’d return with the drinks so he could start on the buzz he intended to get. Maybe he’d even get drunk so he could forget how alone he was feeling. “He loved your work.”

Zach had developed a graphic novel using Bull as the model for the hero. It had started slowly at first, but his work was gaining in popularity, and he’d already finished a second and was working on the third installment. “So you’ll find someone else,” Zach told him.

“I sure as hell hope so.” Dating his right hand was not going swimmingly. He looked around and saw Kevin and Tristan walking toward the table. They set down the drinks and then took their seats.

“Is Eddie busy tonight?” Jeremy asked Tristan before sipping from his martini glass. He wanted to gulp the thing and then get another, but Tristan had ordered the good stuff, and it was way too fine to waste like that.

“Eddie’s working late. He said he’ll join us a little later.” Tristan grinned. Jeremy knew he should be happy. Tristan obviously was, and Eddie was a nice enough guy. But he was having trouble feeling good for anyone now. Maybe he should have stayed home and moped there instead of bringing everyone else down. He wished he knew where this case of the lonely grumps had come from. This wasn’t him, and he hated being this way. He told himself to snap out of it. A few seconds later the music started.

“Come on and dance with me,” he said to Tristan. They had all been friends for a while, and he’d known Tristan for years. “Eddie isn’t going to mind, and I promise to watch out for your virtue.” He needed something to knock this attitude out of him.

Tristan got up, and they headed to the dance floor. The exotic dancers weren’t supposed to perform for another hour, and sitting around ruminating was not going to help. The beat was great, and Jeremy began to move. Tristan was a good dancer, so they had a great time. Gradually, Jeremy let go of his worries and let the music carry him.

The dance floor got crowded and guys bumped him, but he paid no attention. He was having a good time. After a few songs, Tristan signaled that he was going back to the table. Jeremy wasn’t ready to stop, so he continued dancing. A guy a little taller than he was, but stocky, with dark eyes and brown hair, moved close to him. Without thinking, Jeremy synchronized his movements to the guy’s, and he came closer. The song ended and another began, this one faster. The other guy moved right up to him, sliding a knee between Jeremy’s legs, cradling him with one arm around his back. Now they were moving as one.

Sweat beaded on Jeremy’s skin and his heart raced in the best way ever as sexual energy built between them. Jeremy’s mouth went dry and he was hard as a rock in his jeans, and the excitement continued to build. He’d always thought that dancing was vertical sex, and if he was right, then sex with this guy was likely to be wild, maybe a little dangerous, and definitely a drive to the moon. The guy leaned closer, wrapping his other arm around him, and then Jeremy was drawn even closer… and finally kissed to within an inch of his life.

Jeremy’s entire body tingled. The guy tasted like peppermint, and he loved that. Jeremy returned the kiss, throwing his arms around the man’s neck and holding on for dear life. He loved this feeling, like he was flying, and he never wanted it to end.

Of course the song did end, and the mood changed. Jeremy came to his senses and realized he’d been making out with a complete stranger in the middle of the dance floor, in full view of all his friends. That was not a good thing. Oh, the making-out part had been great, but he was not in the habit of moving this quickly with a stranger. “My friends are at the table,” he stammered. “I should go back and join them.”

“Will I see you later?” the guy asked.

“Sure. I’m Jeremy,” he said, forcing a smile. “And we’re sitting right over there.” He turned and walked back toward the table, his legs a little unsteady. He sat down with the guys and picked up his drink, looking at the table.